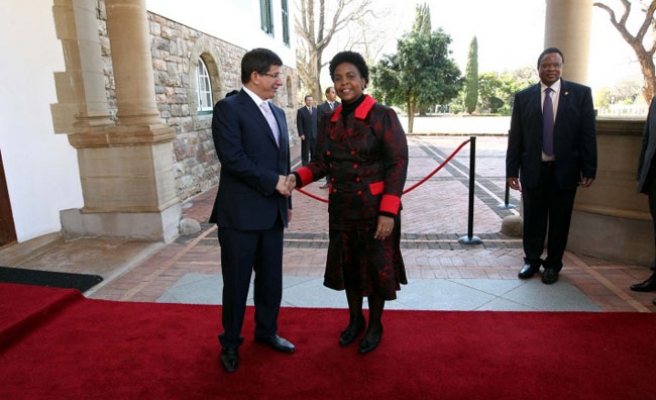 Speaking at a joint press conference after meeting South African Minister of International Relations and Cooperation Maite Nkoana-Mashabane, Davutoglu said that he had excellent and comprehensive talks with Mashabane.

We discussed bilateral relations and talked on various regional and global issues. We decided to make more efforts so that our two countries can boost relations that promise a great potential, Davutoglu said.

Turkey views itself as an European and Asian country as well as an African one. South Africa has an important place in Turkey's African move, Davutoglu said.

Answering a question on Libya, Davutoglu said that Turkey's and South Africa's policies on Libya had many common points.

We do not desire a divided Libya, Davutoglu said.

In response to a question on Syria, Davutoglu said that he was calling again on the Syrian administration to fulfill promises made to the Syrian people.

Minister Mashabane said that Davutoglu's visit to South Africa was a crucial one.

We will continue to hold consultations with each other. We exchanged views on Libya and Syria and want to work with Turkey, Mashabane said.

We welcomed remarks made by Mr. Davutoglu that Turkey was also an African country, Mashabane also said.