Outlining tourism and trade as the two pillars that the sides would capitalize on to improve the bilateral relations, Davutoglu laid stress on the new energy relationship between the sides, based on Trans Adriatic Pipeline (TAP). 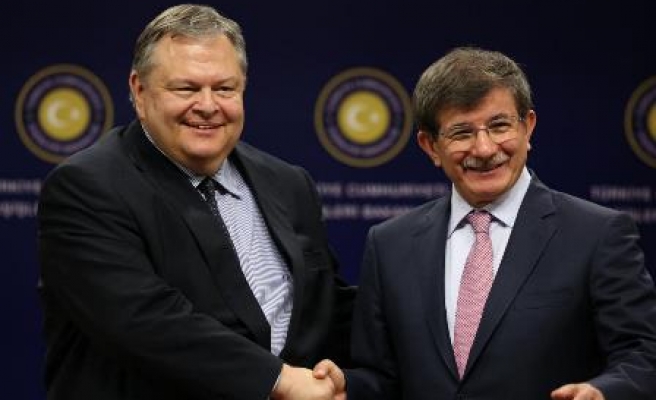 Turkish Foreign Minister Ahmet Davutoglu held a joint press conference with his Greek counterpart Evangelos Venizelos, who is on a one-day official visit to Turkey, at the ministry on Friday.

Stating that it was Venizelos' first foreign trip after being appointed to his new post on January 24, Davutoglu said it carried a symbolic importance for reflecting the nature of friendship and high level strategic relations improved in the recent years.

Davutoglu mentioned that they handled three main issues, bilateral ties, relations within the framework of the European Union (EU) and latest developments in the Middle East.

Davutoglu said the two leaders reviewed the decisions taken at the final meeting of Turkish-Greek High Level Strategic Council, and announced that he would also pay a return visit to Greece either in November or December to discuss the issues that will be handled during the third council meeting in early 2014, when Greece assumes the EU presidency.

Outlining tourism and trade as the two pillars that the sides would capitalize on to improve the bilateral relations, Davutoglu laid stress on the new energy relationship between the sides, based on Trans Adriatic Pipeline (TAP), a pipeline project to transport natural gas from the Caspian Sea (Azerbaijan), starting from Greece via Albania and the Adriatic Sea to Italy and further to Western Europe.

Venizelos said the close bilateral relations started to give their fruits, and added, "We decided to gather the third High Level Strategic Council Meeting after we assume the EU presidency."

"Especially the cooperation that we launched on economy, continues with tourism, infrastructure and transportation," said Venizelos, and added they would work towards increasing number of tourists between Turkey and Greece.

Davutoglu said, "Within this framework several projects, different routes were discussed in the past, however the agreement and the decision taken afterwards in the past one year let the current route to be cleared out. This agreement is the one made between Turkey and Azerbaijan, the Trans-Anatolian gas pipeline (TANAP) to feed the TAP. By this mean the flow and route from Caspian Sea to Edirne on Greek-Turkish border has been finalized. Therefore this zone would further strenghten our bilateral ties. A new corridor has been emerging between us. "

"Other friendly Balkan countries could also be involved in this zone, " said Davutoglu.

Venizelos said the natural gas and pipelines create a new bridge in geostrategical term, while Cyprus question will be more frequently discussed to reach a solution.

Davutoglu said he shared his opinion about the solution of the Cyprus question sincerely with Venizelos.

Davutoglu said, Greece's taking over the EU presidency in the first 6 months of 2014 presents new opportunities for Turkey in terms of opening new chapters, visa exemption, free trade agreements, and added, "We are pleased about Greece's support for our EU membership."

Regarding Turkey's EU membership, he said "In our opinion, a Turkey that behaves within EU acquis communitaire can play better roles both in bilateral, regional arena, as well as with regard to Eastern Medditerranean region."

Regarding Cyprus question, Venizelos said that Greek Cypriot administration determined a new negotiator who is authorized fully, and added, "We are aware of all the dimensions of the problem, we need an element to accelarate the process. I believe in the existence of necessary will."

Developments in the Middle East

Davutoglu said that the two leaders were on the same line regarding democratic transition in the Middle Eastern countries, first and foremost Egypt.

He reiterated that democratic processes should be put in force as soon as possible, and Turkey defended not persons or groups but the fundemental democratic principles in Egypt.

Venizelos finally said that the views exchanged between the two leaders about the Middle East and Egypt as well, would provide an insight to his meetings in Mallorca on Friday afternoon and on Monday with the EU officials.

Davutoglu said, "Aegean Sea related problems and areas of cooperation are already handled by an existing mechanism. Instead of unilateral declarations, both sides should tend to widen the areas of cooperation," and added, "I am very hopeful about this, hopefully we will bind the two parts of Aegean Sea with tourism and trade, as we did to Edirne with energy."

Venizelos replied the question, "We see TAP and TANAP as peace and friendship projects. About the exclusive economic zone, all sides know their rights, the regulations. They try to protect their sovereignity rights within international law. All sides have to find solutions that would be accepted by international law and public opinion."