Davutoglu said Turkey was honored to welcome Kazykhanov on his first trip abroad since assuming the top diplomatic post. 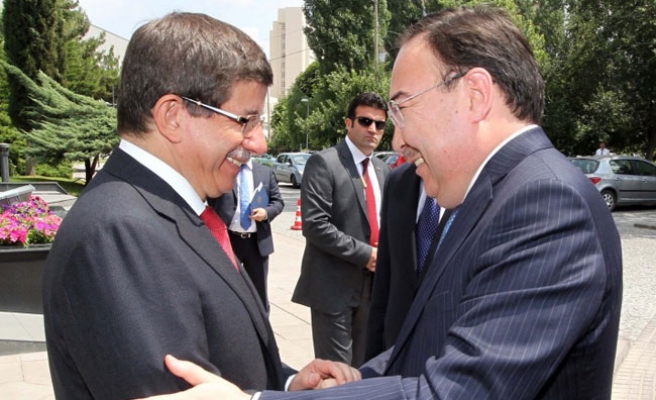 Speaking at a joint press conference later on, Davutoglu said Turkey was honored to welcome Kazykhanov on his first trip abroad since assuming the top diplomatic post.

"This year, Kazakhstan celebrates the 20th anniversary of its independence and we are utterly pleased with the success it has achieved in the international arena in recent years," Davutoglu told reporters.

Davutoglu said Kazakhstan had assumed some very important tasks in many international institutions, adding that Turkey supported the country's bid to have a non-permanent seat at the UN Security Council.

The Turkish foreign minister said the trade volume between the two countries was expected to reach 5 billion USD in 2011, with an eye to boost that figure to as high as 10 billion USD in the near future.

Davutoglu said Wednesday's talks with his Kazakh counterpart included cooperation in transportation and energy as well as bilateral political relations.

Responding to a question over ongoing settlement talks in Cyprus, Davutoglu said Turkey favored a fair and viable solution in the shortest possible time, adding that steps should be taken to reach a settlement by the end of 2011.

Kazakh foreign minister, on his part, said that economic cooperation between Turkey and Kazakhstan had improved over the last years, adding that they aimed at increasing trade volume to 10 billion USD.

Kazykhanov said the Kazakh capital was set to host a meeting of the Turkish Speaking Countries Council in November, adding that he invited Turkish President Abdullah Gul to the meeting.

"We have great opportunities to boost cooperation between our two countries. We respect Turkey's role and its experiences in the international arena. Especially, Davutoglu's personal contributions have played critical role in the settlement of many issues," Kazykhanov said.