The convoy left a base in Gaziantep province to head south to Kilis province, where the troops will stay, the state-run Anatolian news agency said. 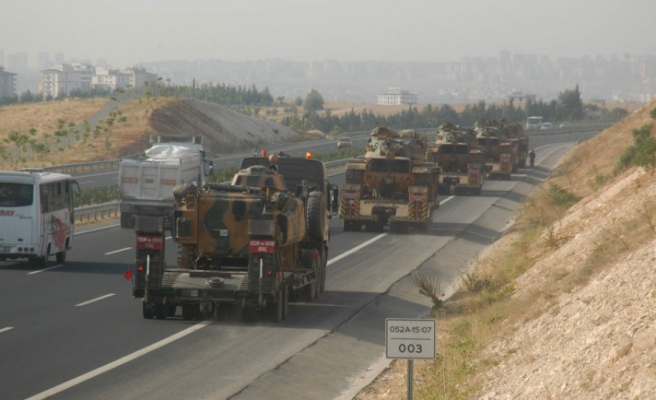 Turkey sent a convoy of about 20 vehicles carrying troops, missile batteries and armoured vehicles to the border with Syria on Monday amid growing concern in Turkey about security on its southern frontier, news reports and witnesses said.

It was the latest in a series of deployments in the region in recent weeks. There has been no indication that Turkish forces will cross the border, and the troop movements may be strictly precautionary in the face of spiralling violence in Syria.

The convoy left a base in Gaziantep province to head south to Kilis province, where the troops will stay, the state-run Anatolian news agency said.

Witnesses said the troops and vehicles had left a major highway and were now stationed along a fenced-off section on the frontier with Syria.

Television footage from Dogan News Agency showed at least six armoured vehicles atop trucks traveling along an asphalt road. Buses and covered trucks that appeared to be personnel carriers were also in the convoy.

Turkey, a member of NATO, in recent months has conducted a number of troop deployments along its 911-km (566 mile) border with Syria, which is in the throes of an insurgency seeking to topple President Bashar al-Assad.

Prime Minister Tayyip Erdogan, a former Assad ally, is now among his most vocal critics, calling for him to step down from power amid the 16-month uprising that has killed thousands of Syrian civilians.

Tensions between the neighbours hit a peak on June 22, when Syrian forces shot down a Turkish military reconnaissance aircraft, killing two pilots.

Kilis houses a major refugee centre for Syrians fleeing the violence at home. About 44,000 refugees are in Turkey.

Erdogan last week warned the Kurdistan Workers Party (PKK), an armed militant group that has launched attacks inside Turkey, against setting up camps inside northern Syria.

That area, which has a large Kurdish population, has been spared much of the violence seen elsewhere in Syria, but Turkey is worried the PKK could exert influence there amid a power vacuum and threaten Turkish security at the border.

The PKK has waged a 27-year campaign for autonomy in Turkey's largely Kurdish southeast, and more than 40,000 people have died in the conflict.