Davutoglu has played down possible Syrian links to a recent rise in PKK attacks in Turkey, saying unrest across the border was not the cause of Turkey's problems. 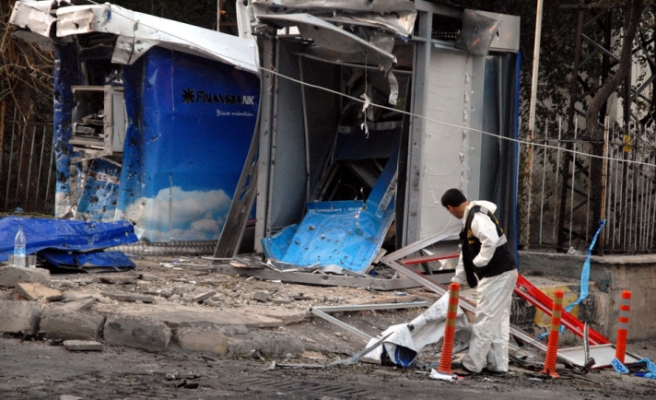 Turkish Foreign Minister Ahmet Davutoglu has played down possible Syrian links to a recent rise in PKK attacks in Turkey, saying unrest across the border was not the cause of Turkey's problems.

Turkey has seen an upsurge in attacks over the past few weeks, including a car bombing in the southern city of Gaziantep on Monday that killed nine people. Some Turkish officials have blamed the attacks on the conflict in Syria.

In an interview on Turkish television late on Friday, Davutoglu said although militants may be trying to take advantage of intensifying fighting in neighbouring Syria, such attacks were not new in Turkey.

"Terror in Turkey did not appear as a result of the developments in Syria, it is a problem that has lasted for 30 years," Davutoglu said.

"The terror organisation may want to exploit chaos in Syria, however, to think that Turkey's terror incidents originate in Syria would a be a deficient approach. It is not possible to explain terror with one factor," he said.

The government blames the PKK, which is listed as a terrorist group by the United States and the European Union, for Monday's attack in Gaziantep, a hub for international aid for Syrian refugees. Turkish authorities have arrested over a dozen people in connection to the bombing.

The PKK, which has stepped up attacks on Turkish security forces in recent months, particularly in the mainly Kurdish southeast of the country, has denied involvement in the bombing in Gaziantep.

Davutoglu's comments stand in contrast with a view shared by a growing number in Turkey, including some from his own party, that the PKK is getting direct support from Syria's President Bashar al-Assad and Kurdish groups in Syria.

Speaking a day after Monday's bombing, a Gaziantep lawmaker from the ruling AK Party said the raid had been planned with Syrian intelligence and was in retaliation for Ankara's policy towards Syria.

Turkey initially cultivated good relations with Assad but relations have deteriorated since the uprising against him began 17 months ago. Turkish Prime Minister Tayyip Erdogan has become one of his harshest critics and has raised the possibility of military intervention in Syria if the PKK became a threat there.

Turkey suspects a major Syrian Kurdish movement, the Democratic Union Party (PYD), of having links with the PKK. Turkish analysts believe Assad let the PYD seize control of security in some towns in northern Syria to prevent locals from joining the rebel Free Syrian Army (FSA).

Assad has denied that Syria had allowed the PKK to operate on Syrian territory close to the Turkish frontier.

Speaking on condition of anonymity, a Turkish official told Reuters on Friday the government still had no solid evidence of any Syrian link and said there had been other waves of militant attacks in the past when relations with Syria were good.

Clashes between Turkish security forces and PKK militants have intensified in recent weeks, particularly in Turkey's southeastern Hakkari province near borders with Iraq and Iran.