Erdogan and top Iranian officials are expected to discuss Syria's civil war, international sanctions on Iran and economic relations between the two countries. 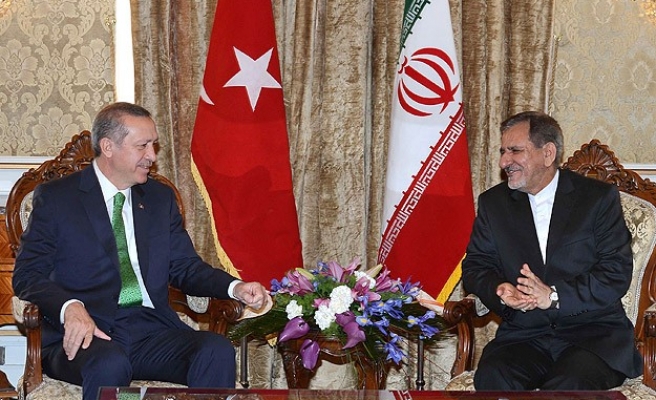 The prime minister and Iranian officials are expected to discuss a wide range of topics on the bilateral relations between Turkey and Iran.

Iran's stance on the Syrian civil war, the relief of sanctions after the nuclear deal, and the economic relations between the two countries would be on the agenda of the meetings, Erdogan announced.

The prime minister and Iranian officials are expected to discuss a wide range of topics on the bilateral relations between Turkey and Iran.

Erdogan earlier on Tuesday anounced Iran's stance on the Syrian civil war, the relief of sanctions after the nuclear deal, and the economic relations between the two countries would be on the discussion table.

Turkey will continue to foster dialogue between Iran and the international community in a bid to remove the sanctions imposed by the EU and U.S,Turkey's Prime Minister Recep Tayyip Erdogan said on Tuesday.

Erdogan held a press conference in Turkey's capital of Ankara before his official visit to Iran.

The Prime Minister said that Turkey hoped that the process on Iran's nuclear program, which resulted in an agreement last November, would evolve into a comprehensive deal to lift the sanctions.

"Turkey has shown maximum effort for this and will continue to foster dialogue between the relevant sides," Erdogan said.

Iran and world powers reached an agreement on November 24 that asked Iran to roll back its nuclear program in return for a mild easing of sanctions, which are taking a toll on its economy.

The temporary six-month agreement, requires Iran to stop enriching uranium beyond five percent during, eliminate its stock enriched beyond this mark, and open its nuclear sites to broader inspection.

Turkey, which currently imports 10 billion cubic meters of natural gas from Iran, has been effected by the sanctions, an issue that Erdogan plans to raise on his visit.

Since Iran's President, Hassan Rouhani was elected in 2013, the countries' Foreign Ministers have maintained close contact.

Rouhani is also expected to visit Turkey in the near future, Erdogan added.

Economic agreements and the issue of Syria will be the hot topics when Turkey's Prime Minister, Recep Tayyip Erdogan, visits Iran on Tuesday, according to Turkish academic Mehmet Sahin.

Mehmet Sahin, a Turkish international relations expert at Gazi University, said some of the meetings will focus on bilateral political and economic relations and others on geopolitical relations - mainly concerning Iraq and Syria.

As neighboring countries, Iran andTurkey are traditionally trading partners and Iran has exported $10.2 billion worth of natural gas to Turkey since 2001.

"Turkey gets 75% of its energy from outside sources, and Iran is a country that sells energy," said Turkish economist Harun Ozturk from Afyon Kocatepe University. "Turkey and Iran need each other, asTurkey needs energy from Iran while Iran is trying to extend it’s energy market."

In contrast to Turkey and Iran's shared economic partnership, the current conflicts in Syria and Iraq have affected the countries' relations. Iran's support of the Assad regime in Syria has often led to accusing Turkey, who back the opposition, of supporting terrorist groups in Syria.

Sahin says that, actually, the presence of radical groups in Syria means "Turkey and Iran have same enemy."

Nevertheless, Sahin argues that the two countries are not on the same page and are not likely to reach an agreement regarding Syria and Iraq anytime soon.