Erdogan threw Turkey's weight behind a Palestinian bid for statehood and criticised Israel in an address to Arab states meeting in Cairo. 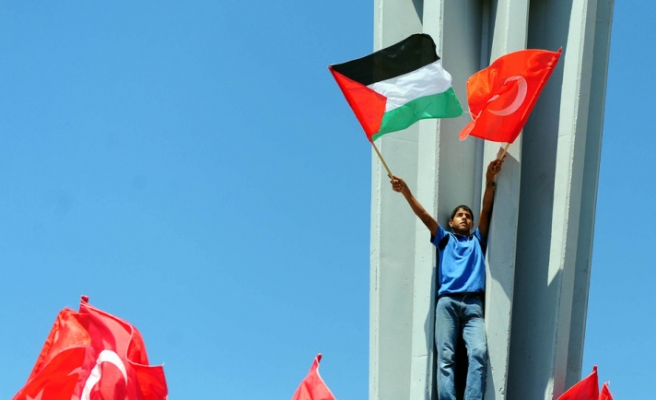 Prime Minister Tayyip Erdogan threw Turkey's weight behind a Palestinian bid for statehood and criticised Israel in an address to Arab states meeting in Cairo geared to buttress his image as a leader of a region in turmoil.

Erdogan is touring Arab states to capitalise on Arab regard for Turkey's blend of Islam and democracy as a model for movements that have toppled several Arab autocrats, and on popular Arab support for his sparring with Israel.

His destinations on the tour -- Egypt, Tunisia and Libya -- have all witnessed the fall of entrenched leaders to grassroots revolts this year, challenging the old order across the region.

"Erdogan, Erdogan!" cheered a group of demonstrators as the Turkish prime minister left the headquarters of the Arab League in Cairo where he spoke. They were calling for change in Syria, whose military is trying to stamp out popular unrest.

He told the Arab ministers that international recognition of a Palestinian state was "not an option but an obligation."

Palestinians will bid for full membership of the United Nations later this month, a move opposed by the United States which has a veto. Arab states endorsed it at the Cairo meeting.

Arab League Secretary-General Nabil Elaraby introduced the Turkish prime minister saying: "All the Arab peoples appreciate what you are doing. We consider that there is a strong friendly state who is always standing on the side of justice."

Outside the League, Syrian protester Samer Zaher, 30, said: "Erdogan has turned into an Arab hero ... We have not found a leader as powerful as him addressing (Syrian President Bashar al-Assad) and asking him to quit."

Turkey expelled the Israeli ambassador last week in a row over an Israeli raid last year that killed nine Turks on an aid flotilla bound for Gaza, a Palestinian enclave under blockade by Israel.

Erdogan told leading pan-Arab broadcaster Al Jazeera this month that the incident was a "cause for war" but said Turkey acted with "patience", according to a transcript.

While winning over ordinary Arabs, particularly because of non-Arab Turkey's tough line towards Israel, Erdogan's growing popularity and clout could be a headache for more cautious Arab leaders who could see their own influence overshadowed.

"Turkey wants to play a regional role, especially when Egypt is busy with the revolution. Turkey thinks it's best placed to play this leadership role," said Adel Soliman, head of Cairo's International Centre for Future and Strategic Studies.

Egypt has traditionally seen itself as the leading diplomatic player in the Arab region. But its position has been eroded by wealthy Gulf countries, such as Qatar, and lately overshadowed by Turkey, with its fast expanding economy.

Egypt has also been embroiled in a dispute with Israel after Israel shot dead five Egyptian border guards.

But Egypt's generals have faced popular criticism for not taking a firmer line. Cairo said it would expel Israel's ambassador but did not follow through with word.

Protesters attacked Israel's embassy in Cairo last week, prompting the ambassador to fly home and an Egyptian government to affirm to Washington, its major aid donor, that it remained committed to a 1979 peace treaty with Israel. Egypt has received billions of dollars in U.S. military and other aid since making peace with Israel.

Erdogan was cheered by a crowd when he arrived in Cairo and met by Egyptian Prime Minister Essam Sharaf. Many appeared to be Islamists such as the Muslim Brotherhood, who hail him for his success in bringing Islamists into mainstream Turkish politics.

"Erdogan, Erdogan -- a big welcome from the Brothers!" one banner said. "Hero Erdogan" was written on a photo of him.

"We need to preserve our relations with Turkey and all the countries that want to help the Arab world and take advantage of them to create a stronger political front to enhance the Arab states' position against Israel," said Mohammed Adel of the April 6 movement which helped lead the revolt to oust Mubarak.