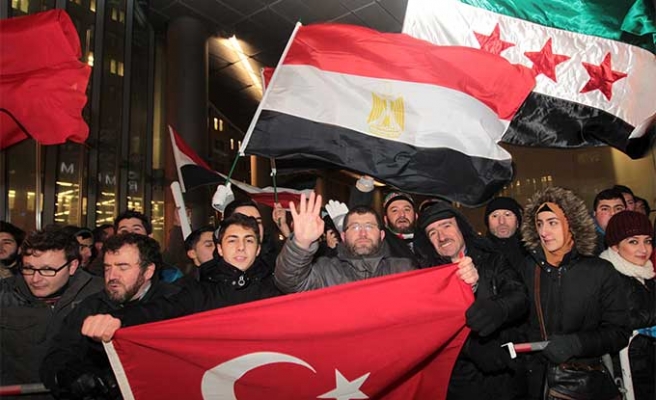 Crowds gathered on a freezing Berlin night to welcome Turkey's prime minister to Germany on Monday.

"Stand tall, don't cave; the nation stands with you... Turkey is proud of you," wellwishers chanted outside his hotel.

Before leaving Turkey, Erdogan had spoken of the Turkish community's success in Germany.

"We have a deeply-rooted relationship and history," he told reporters in Istanbul.

He talked of the three million Turks who have successfully integrated into German society - one million of whom have citizenship - and highlighted that Germany had 11 lawmakers and one minister of Turkish origin.

"We hope that the Turkish community can continue to take an active role in German society and be successful," he added.

Vasfiye Kurt, 72, who traveled from neighboring Austria to greet Erdogan on a cold Berlin evening, said she was praying night and day for him.

"May God help him and protect him from evil people. We can't find another prime minister like him," she said.

Sila Aksoy, a German citizen, said she had waited for three hours for Erdogan's arrival.

"We got really cold but it was worth it. I became very emotional. We love our prime minister, we will always support him."

He will also deliver a speech at the German Council on Foreign Relations, one of the country's leading think tanks.

The visit is expected to further cooperation between the two partner countries, and present opportunities to exchange views on international issues.

Erdogan said that he will also discuss attempts to open a Turkish-German university, and give great importance to the enhancement of bilateral relations in educational, scientific and cultural areas through joint projects.

Turkey's deputy prime minister has discussed dual citizenship and voting rights for Turks living in Germany during a trip to Berlin on Monday.

After a meeting with Aydan Ozoguz, the German minister for immigration, refugees and integration, Emrullah Isler told reporters they had discussed "terms to ally the two countries' institutions."

Ozoguz - the deputy leader of Germany’s Social Democrats - is the first ever Turkish-origin minister to make it to the German federal Cabinet.

"We believe that problems can be solved through dialogue," Isler said.

Isler emphasized that Turkish citizens not born in Germany, but who have been living there for many years, should be given dual citizenship.

"We will make progress on this issue in the coming years."

He confirmed that Turkish citizens living overseas will be eligible to vote in Turkey's presidential and general elections.

Almost 3 million Turkish people live in Germany, according to a report announced by Germany's Federal Statistics Department in May, 2013.