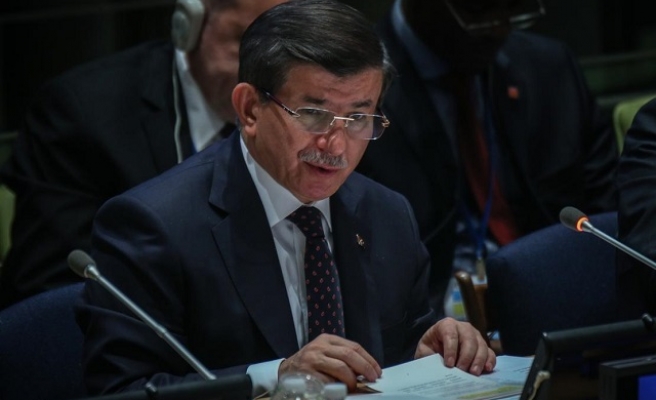 Turkey’s Prime Minister Ahmet Davutoglu held meetings on Saturday with a host of world leaders including the German chancellor and Palestinian Authority president.

In a closed-door 45-minute meeting with Angela Merkel at Germany's permanent mission to the UN, the leaders discussed the European Union's response to the ongoing refugee crisis and Turkey's recommendations to address the issue, sources said.

Europe is facing its biggest refugee crisis in decades, with thousands of asylum seekers from Middle Eastern and African countries trying to reach the continent. EU interior ministers struck a deal Tuesday to share 120,000 refugees across the 28-member bloc.

Another issue raised was the Syrian civil war. The Turkish premier stressed the need to protect Syrians from attacks by Bashar al-Assad’s regime and terrorist groups, sources said.

The conflict has claimed more than 250,000 lives since 2011 and resulted in one of the largest refugee exoduses since the Second World War.

Tensions have recently mounted in the West Bank and Jerusalem, with a number of clashes erupting after groups of Jewish settlers forced their way into Muslim holy sites. Rights groups say more than 150 Palestinians have been detained in East Jerusalem in the past 15 days.

Abbas accused Israel of sabotaging the Mideast peace process and sparing no effort to keep the West Bank and Gaza separated, according to Turkish sources.

The leaders are in the U.S. for the 70th meeting of the UN General Assembly.