Erdogan said on Friday that tragedy in Somalia was testing contemporary values. 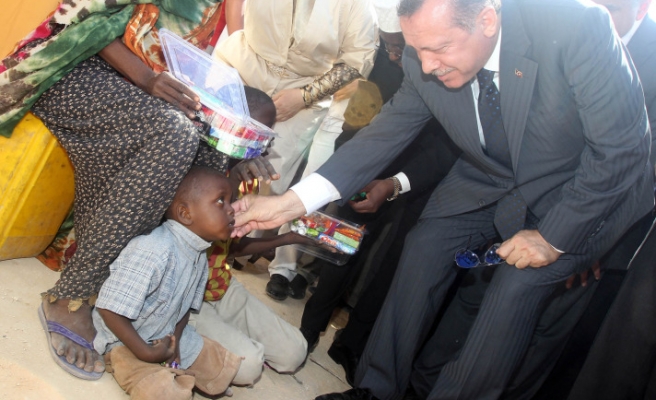 Erdogan is currently in Somalia to visit a camp built by Turkish Red Crescent and a field hospital opened by Turkish Health Ministry.

"In fact, the tragedy in Somalia is testing modern values. What we want to emphasize is that contemporary world should successfully pass this test to prove that Western values are not hollow rhetoric. I would like to address conscience of people one by one, I would like to address parents living in the other areas of the world. Please don't forget that rights of your children, who cheerfully pass their time in parks, are also valid for the children here. Mothers and fathers in Somalia are deeply grieving. It is in fact possible to put out this fire. As Turkey, we are not waiting for what the other countries will say," Erdogan said.

He said, "I am addressing my country from here; there are some rumors saying, 'what is he doing there although there are poor people in Turkey?' I am recommending them to come to Somalia and see the situation here."

"I know that Somalia is having the most difficult days, months and may be the years. It is face to face with drought and famine. We have seen the camps and there are several other camps we will visit after the news conference. The people are particularly face diseases. We are deeply saddened over seeing the situation of particularly the children," Erdogan said.

Addressing Somalis, Erdogan said, "We are here to hear your voice more closely. We are here with our MPs, businessmen, businesswomen, artists and NGOs. We want to voice your situation to the world with this visit. In fact, this is not a matter of Turkey, but the world. However, as Turkey we are here acting as if there is nobody."