Turkish PM touches on secularism in Tunisia after Egypt

Erdogan also shared the same opinions in Egypt and Muslim Brotherhood expressed its opposition at his words in Cairo. 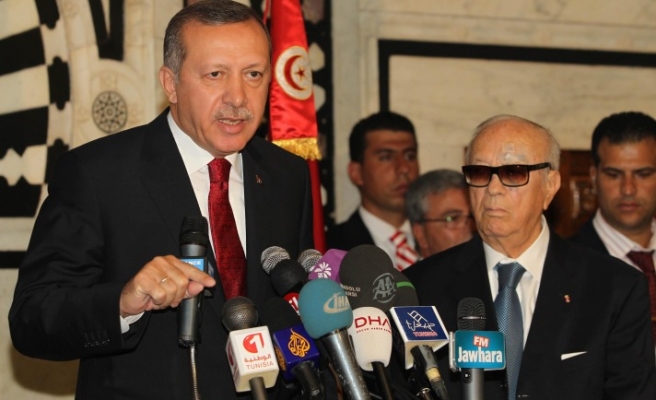 Tunisia's new political order will show that Islam and democracy can co-exist just as they have in Turkey, Turkish Prime Minister Tayyip Erdogan said on Thursday.

Erdogan, in Tunis on the second stop of a North African tour aimed at asserting Ankara's growing regional influence, said secularity should guarantee that people of all beliefs, as well as atheists, were treated fairly.

He said there was "nothing" to stop a Muslim from governing a secular state.

Erdogan has been holding up Turkey's blend of Islam and democracy as a model for the movements which have toppled entrenched Arab autocrats in Tunis, Cairo and Tripoli.

"On the subject of secularism, this is not a secularism in the Anglo Saxon or Western sense, a person is not secular, the state is secular," he told a joint news conference with Tunisian caretaker Prime Minister Beji Caid Sebsi.

"A Muslim can govern a secular state in a successful way," he suggested.

The visit fueled a debate whether the Turkish model he touted — with an Islamic-based political party governing a secular democracy — was really applicable in other Muslim states.

Erdogan also shared the same opinions in Egypt and Muslim Brotherhood expressed its opposition at his words in Cairo.

A Brotherhood spokesman, Mahmoud Ghozlan, praised Erdogan as "a respectable leader who preserves the dignity of his country and who shares similar position with Israel." But he said, Egyptians want an Islamic state.

"In Turkey, when a man finds a woman in bed with another man, he can't punish her by law because it is permitted there. It means that Turkey ... violates Islamic Shariah law," he said.

Tunisia plans to hold elections on Oct. 23 to select an assembly to rewrite the constitution, nine months after the revolt that swept away President Zine al-Abidine Ben Ali and sparked uprisings around the Arab world.

Islamist party Ennahda, banned for two decades under Ben Ali, is expected to poll strongly in the face of Tunisian secularists.

More than 90 political parties have sprung up in Tunisia since Ben Ali's fall. Ennahda is seen with around 20 percent in the polls.

Ennahda leader Rachid Ghannouchi joined the crowds, praising Erdogan as someone who had "worked hard for Islam".

Ennahda, a Islamist movement which has close ties with Erdogan's AK Party, has said Turkey's political model is something it aspires to.

Erdogan completes his tour in neighbouring Libya on Friday.