Erdogan told a Somali woman who lost her child that a field hospital would be established in the region soon. 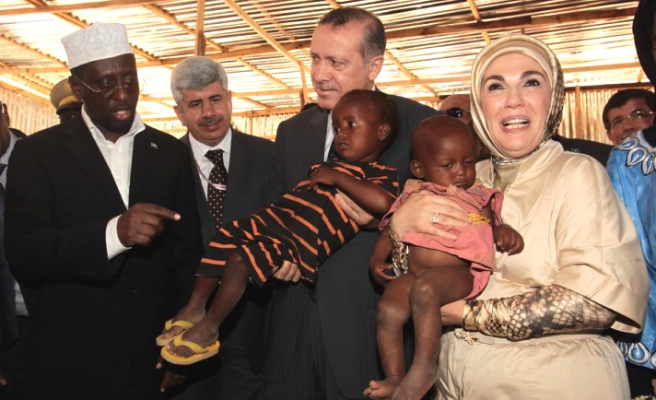 Turkish Prime Minister Tayyip Erdogan visited Somalia's capital Mogadishu on Friday to draw international attention to the famine sweeping across the Horn of Africa nation, threatening to kill hundreds of thousands of children

Erdogan, accompanied by his family and five cabinet ministers, has in the past days appealed for more food aid for the drought-hit nation and lashed out at wealthy Western nations for not doing more.

Somalia's President Sheikh Sharif Ahmed welcomed Erdogan at the airport with a warm embrace, before Turkey's premier, dressed in a sharp, crisp suit and his wife in haute-couture Islamic dress drove through the city's rubbish-strewn streets.

At one dusty, windswept refugee settlement, Erdogan crouched inside the tent of Bashir and Fatima, a young couple mourning the loss of two of their four children who died after trekking 90 km (55 miles) to Mogadishu.

The Organisation of the Islamic Cooperation (OIC) countries pledged on Wednesday $350 million in aid to fight the famine which has left 3.7 million Somalis at risk of dying of hunger.

Erdogan has said he hoped the OIC's efforts would jolt the consciences of those ignoring the unravelling humanitarian emergency.

A pious Muslim, he has called the disaster a "litmus test" for all humanity.

Muslim Turkey, a rising political and economic power that straddles East and West, is far behind other emerging powers such as China, Brazil or India in the race for new markets in Africa.

But under Erdogan's ruling AK Party government, Turkey has expanded commercial ties in Africa, as well as in the Middle East and Asia, and opened several new embassies in Africa.

The U.N.'s World Food Programme said on Friday it was still unable to reach 2.2 million hungry people living in areas of southern Somalia.

Aid agencies say that while droughts are a natural phenomenon, this famine is largely down to conflict and bad governance.

"Droughts will happen. They always will, but they don't have to be disasters. They can be managed," Oxfam's Philippa Crosland-Taylor said in neighbouring Kenya.

We will never forget what Turkiya did to Somalia, they stand with the somalis when they were in real need of help, Thanks Erdogen