Erdogan will address the 22-member Arab League and hold talks with the military council steering post-Mubarak Egypt to civilian rule. 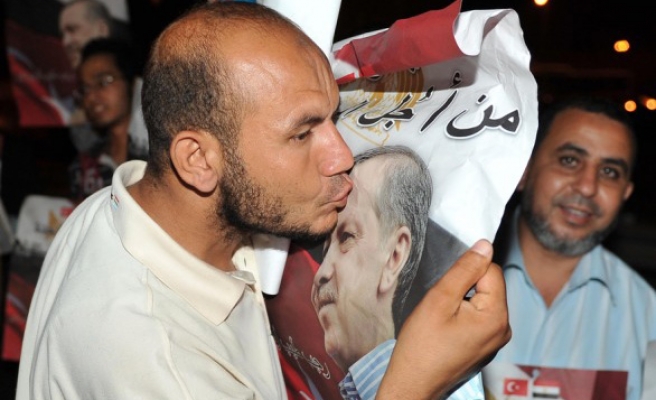 Turkish Prime Minister Taypip Erdogan received an enthusiastic welcome in Egypt at the start of a North African tour which will assert Turkey's role as a friend and helper of the popular movements that have toppled long-standing Arab leaders.

Boosted in the eyes of the Arab public by his opposition to Israeli actions in the region, Erdogan will address the 22-member Arab League and hold talks with the military council steering post-Mubarak Egypt to civilian rule amid rising popular anger against Israel.

"The visit is important," said Mohammed Adel of the April 6 movement of youth activists involved in street protests that saw veteran ruler Hosni Mubarak ousted from office in February.

"We need to preserve our relations with Turkey and all the countries that want to help the Arab world and take advantage of them to create a stronger political front to enhance the Arab states' position against Israel."

Erdogan, who has condemned Israeli leaders repeatedly since deadly Israel assault on Gaza began in December 2008, was met by Essam Sharaf, the head of an interim cabinet that answers to the military council, and a rapturous crowd of several thousand.

They clapped and cheered as the two men came from the tarmac at Cairo airport hand-in-hand to greet them on Monday night. Many appeared to be from Islamist groups such as the Muslim Brotherhood, who see Erdogan as a role model because of his success in bringing Islamists into mainstream Turkish politics.

"Erdogan, Erdogan -- a big welcome from the Brothers!" one large banner said, while others had large photos of Erdogan with "Turkey-Egypt hand in hand for future" and "Hero Erdogan" written on them.

"I have come here to say 'thank you' because he says things no man can say," said Hani, a 21-year-old university student.

Erdogan took a microphone set up for the occasion to address the crowd, saying "Peace be upon you" and "Greetings to the Egyptian youth and people, how are you?" in Arabic.

In return, Erdogan received an enthusiastic welcome from Egyptian people who clapped and cheered as Erdogan addressed them. They chanted slogans, "Erdogan is saviour of the Islam".

Erdogan, who has led his Islamist-leaning Justice and Development Party to three election victories, will also visit to Libya and Tunisia, the two other Arab countries where the people have succeeded in removing unpopular rulers this year.

Ankara expelled the Israeli ambassador over an Israeli raid last year that killed nine Turks on an aid flotilla bound for the Palestinian enclave of Gaza.

Erdogan told leading pan-Arab broadcaster Al Jazeera this month that the deadly raid was a "cause for war" but said Turkey acted with "patience", according to a transcript of the interview, excerpts of which were broadcast last week.

The government appeared to fumble in its response to that incident, at first saying it had recalled Egypt's ambassador to Tel Aviv then saying it had not.

Even if Egypt wanted to match Turkey's regional grand-standing, it would be difficult now as the country grapples with deteriorating security, planning for elections, trials of Mubarak and other ancien regime figures, protests and strikes.

Egypt has traditionally seen itself as the leading diplomatic player in the Arab region, but its position has been eroded in recent years as wealthy Gulf countries with small populations such as Qatar increasingly make the running.

"Egypt is not in a position to play such a role at the moment so Erdogan is trying to take advantage of that," said Adel Soliman, head of Cairo's International Centre for Future and Strategic Studies.

Soliman played down prospects of Egypt and Turkey aligning policies against Israel, despite the spats.

"I don't think they will have any big agreements when it comes to Israel," he said. "There is a lot of exaggeration. I see it more as theatrics than anything practical."

A foreign ministry official said there was no rivalry. "The results of Erdogan's visit will show that Turkey cares about Egypt, just as Egypt is keen to have good relations with Turkey," said Amr Roushdy.

At the Arab League headquarters in Cairo, Erdogan will talk with Palestinian Authority leader Mahmoud Abbas on the Palestinian UN statehood bid.

Erdogan and his Egyptian counterpart will sign a Joint Political Statement about establishment of a High-Level Strategic Cooperation Council. They will hold a joint news conference following the signing ceremony.

Turkish premier will partake in a dinner to be hosted in his honor by Egyptian Premier Sharaf and deliver a speech at the Cairo University International Law Forum.

He will also meet leaders of leading political parties, representatives of non-governmental organizations and Turkish businessmen investing in Egypt before proceeding to
Tunisia on September 14.