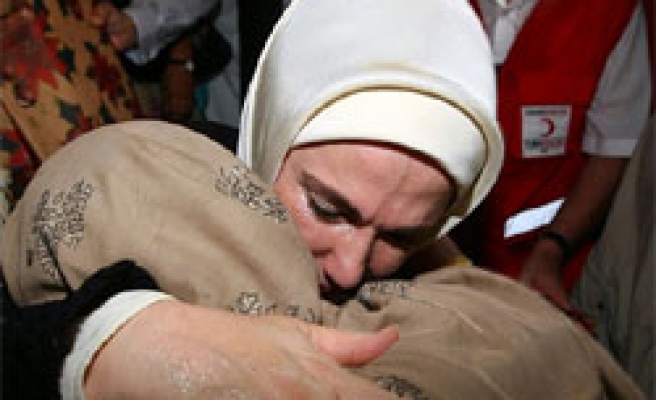 Prime Minister Recep Tayyip Erdoğan's wife, Emine Erdoğan, was in Pakistan on a two-day visit to present officials with TL 3.5 million collected at a fundraising dinner in Turkey to help heal wounds of flood-stricken Pakistanis.

On Thursday, Erdoğan coordinated efforts for TL 1 million worth of humanitarian aid, including medicine, to be distributed to people in need in Islamabad.

Pakistan was hit by torrential monsoon rains last month that triggered the country's worst natural disaster on record. Floods destroyed villages, bridges and roads and killed up to 1,600 people. More than 4 million people have been displaced by flooding and there is widespread concern about the country's recovery.

Erdoğan coordinated a fundraising dinner last week where a group of Turkish businesswomen raised TL 3.5 million for Pakistan's flood victims. She flew to Pakistan on Wednesday to personally deliver aid to some of the victims. She was accompanied by State Minister Egemen Bağış, State Minister for Family and Women's Affairs Selma Aliye Kavaf, Justice and Development Party (AK Party) deputies Ayşenur Bahçekapılı and Fuat Bol, singer Muazzez Ersoy and her daughter, Sümeyye Erdoğan.

The Turkish delegation was welcomed by a group of Pakistani state ministers and Turkey's ambassador to the country, Babür Hızlan.

Erdoğan traveled to the Nowshera region, the area worst affected by the floods. She met with flood victims in the houses built by the Turkish Red Crescent (Kızılay) in the region. She received a heartfelt welcome at the houses, called “Mevlana Evleri” (Mevlana Houses), which were named after world-famous Muslim poet Mevlana Jelaluddin Rumi. She chatted with flood victims there for some time and presented them with gifts.

Delivering a speech in the ceremony for charity event, Erdoğan said that Turkish people followed developments after floods in Pakistan and felt pain of Pakistani people.

Also many Turkish NGOs have been working in several regions in Pakistan and aid campaigns would continue, she said.

She later returned to Islamabad to visit the National Disaster Management Authority in the city.

Ginali said that it would take long time to recover after floods.