Turkish President Gul addressed the Council on Foreign Relations about the Middle East, North Africa and the Arab World and Turkey-US relationship 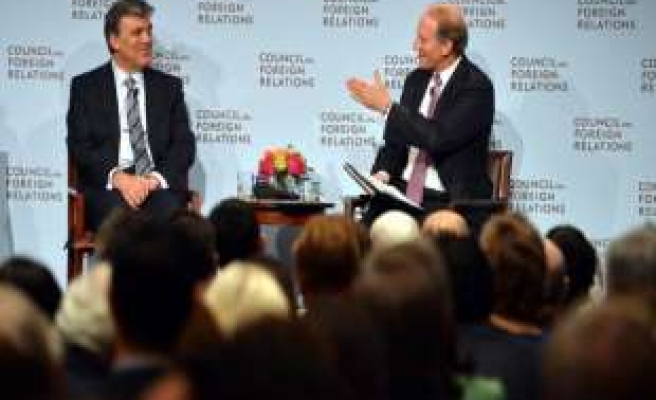 Turkish President Abdullah Gul on Thursday in New York addressed the Council on Foreign Relations about the Middle East, North Africa and the Arab World and Turkey-US relationship.

Speaking at the Council on Foreign Relations on Thursday in New York, Gul shared his views on the broad transformations taking place in Middle East and wider region and particularly focused on the recent developments in Egypt and the ongoing situation in Syria.

Gul concluded with some brief remarks about the Turkey-US relationship.

Gul said, today, the Middle East, North Africa and the Arab World are going through crises that are challenging the very fundamentals of the regional status quo.

"We can no longer comprehend regional outlook only through the parameters of the Palestinian question," Gul said regarding two-state solution in the region.

"Debates over the future of Iraq, the situations in Syria and Lebanon, and developments in Egypt all require such a fresh assessment," Gul added.

For the long term stability in the region, Gul indicated that "democracy, the rule of law, and fundamental freedoms are the strongest guarantee of long-term stability."

For the Egyptian coup, Gul said, "of all regional countries, Egypt perhaps best demonstrates the dynamics I have been describing."

"In the aftermath of the revolution in 2011, Turkey immediately extended its support to the Egyptian people in their pursuit of democracy and freedom," Gul continued.

Gul pointed out "Unfortunately, Egypt’s historic voyage towards democracy has foundered in less than two years," and added, "There remain, however, more fundamental questions. No one will win if Egypt at large loses."

For the future elections in Egypt, Gul said  "The democratic process must be restored to represent the free will of the Egyptian people. This can only be done through free and fair elections in which all political parties and groups can participate."

For the current situation in Syria, Gul said, "The US-Russian agreement to eliminate the Syrian chemical weapons arsenal under international control is a welcome development."

"The complete, final, and verifiable destruction of such weapons in Syria will be a relief to all nations in the region," Gul said and added, "Yet the civil war in Syria did not start with the use of these weapons, and will not end with their elimination."

"The continuation of the conflict creates such an environment that an ordinary citizen is transformed into a radical extremist," said Gul and added, "In the end, we will all have to contain and dissolve a cross-border and region-wide threat."

On Turkey’s relations with the US, Gul said, "Over the last five decades or more, a rich terminology has been used to describe the Turkey-US relationship, the last of which is ‘model partnership."