Turkish President Abdullah Gul met on Tuesday with French President Francois Hollande and attended a lunch hosted by UN Secretary General Ban Ki-moon in New York, where the 68th session of the UN General Assembly is being held 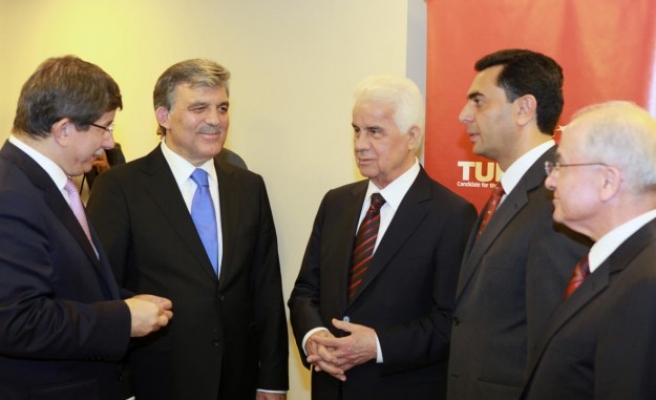 The two presidents stressed the need of the deal on destroying the chemical weapons in Syria should be tranformed into UN Security Council resolution and confirmed maintanence of existing cooperation on solving the crisis in Syria.

French president also noted that he plans to pay a visit to Turkey in the coming days, which Gul stated would enhance relations between the two countries.

After delivering a speech at UN session on sustainable developments, Turkish President Gul also attended a lunch hosted by UN Secretary General Ban Ki-moon and had conversation with US President Barack Obama during the lunch.

Then, Gul hosted a reception in Turkevi [a Turkish center] in New York, due to Turkey's candidacy for non-permanent membership in the UN Security Council for the period of 2015-2016.

Turkish Foreign Minister Ahmet Davutoglu has met Lakhdar Brahimi, joint Special Representative of the UN and the League of Arab States for Syria in New York.

Diplomatic sources said, during the meeting, Davutoglu pointed out that there should be fast and lasting solution meeting the expectations of Syrian public.

Davutoglu told Brahimi that gathering of the Second Geneva Conference was an unavodiable necessity to put forth the parameters and objectives of the process, while Brahimi briefed Davutoglu about the preparations for the Geneva II.

Davutoglu participated in several regional and global initiatives besides his bilateral meetings.

During the trilateral meeting among foreign ministers of Turkey, Serbia and Bosnia Herzegovina, sources said that the parties agreed on widening the scope of their cooperation.

The ministers exchanged views about the benefits of the Trilateral Business Forum that would be convened next year in Sarajevo, emphasizing that the initiative created a positive dynamic in the region instead of tension.

Davutoglu also participated in the Organization for Islamic Cooperation's (OIC) Rohingya Contact Group meeting and highlighted that the Rohingya Muslims in Myanmar were still in a worrisome situation which needed to be adressed by the OIC continuously and more efficiently.