Turkish President Abdullah Gul said, "it is one of priorities of the Turkish foreign policy to prevail peace, stability and prosperity in southern Caucasus." 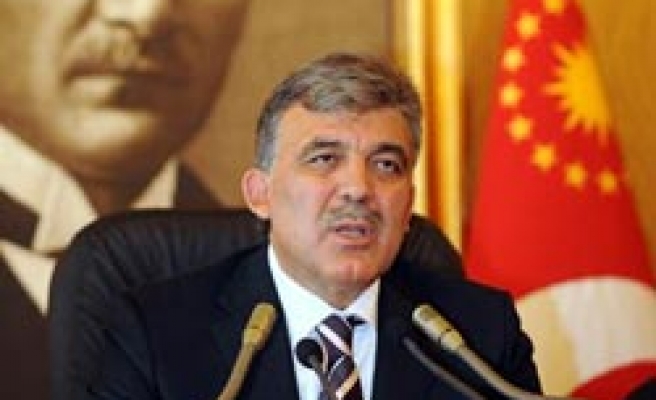 Turkish President Abdullah Gul said on Monday, "it is one of priorities of the Turkish foreign policy to prevail peace, stability and prosperity in southern Caucasus. Turkey closely monitors all developments in southern Caucasus and contributes to the efforts to ensure comprehensive and sustainable peace in the region."

President Gul told a news conference at Istanbul's Ataturk Airport prior to his departure for Azerbaijan, "I will pay a two-day state visit to Azerbaijan to hold talks with President Ilham Aliyev of Azerbaijan and several other Azerbaijani authorities on the bilateral relations as well as global and regional developments."

"Energy is one the areas improving Turkey-Azerbaijan relations and turning these relations into a strategic cooperation. Baku-Tbilisi-Ceyhan oil pipeline and Baku-Tbilisi-Erzurum natural gas pipeline are the most important parts of the cooperation between the two countries. These two projects also contribute to global energy safety and regional prosperity and stability," he said.

"Another project to improve our commercial relations is Baku-Tbilisi-Kars railway line. The project which began in 2007 is expected to conclude in 2012," he said.

President Gul said, "during the talks in Baku, I will underline our attitude once again that the Upper Karabakh dispute between Azerbaijan and Armenia should be resolved peacefully on the basis of Azerbaijan's territorial integrity. We attach importance to efforts to ensure peace in Azerbaijan since we know that frozen conflicts can suddenly turn into serious regional matters."

President Gul said that he would attend inauguration of both the headquarters of the Azer-Turk Bank, which was established by Turkey's Ziraat Bankasi and Agrarcredit CJS NBCO (former Joint Stock Commercial Agrarsenaye Bank of Azerbaijan), and a steel factory constructed by a Turkish company.

"I will later proceed to the city of Sheki, one of symbols of the Turkic world. I believe that this visit will further deepen our historical, cultural and lingual unity and it will add momentum to the efforts to ensure stability in the region," he added.

Turkey and Azerbaijan signed the Commercial and Economic Cooperation Agreement in 1992 and the agreement to encourage mutual investments in 1994. The two countries also signed the Partnership and Cooperation Agreement in 2007. Trade volume between the two countries was calculated as 2.59 billion USD in 2008. Turkish exports to Azerbaijan amounted to 1.66 billion USD while its imports were 925 million USD.