Noting that all members of OIC would convene in Istanbul on August 17, Gormez said that they would ask for the cooperation of Islamic countries to help Africa. 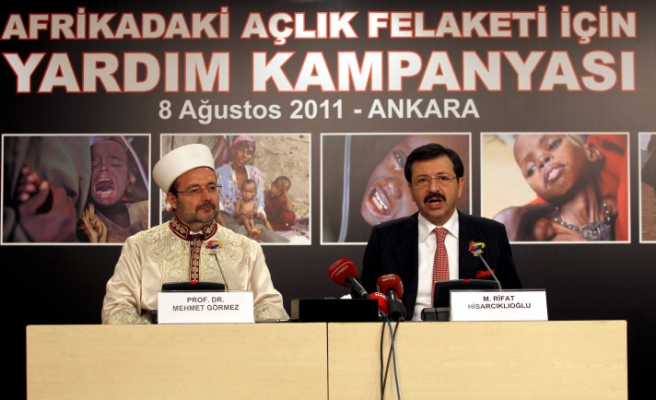 Religious Affairs Director Mehmet Gormez told A.A on Wednesday that death of people in Africa from starvation was a humanity problem, adding that the high interest in relief campaigns in Turkey was a hope for all humanity.

Gormez said that people sent 1.2 million SMS as part of a relief campaign, adding that they collected 31 million TL since August 5.

However, Gormez said, it is not possible to solve the hunger problem only by help of Turkish people.

Noting that all members of Organization of the Islamic Cooperation (OIC) would convene in Istanbul on August 17, Gormez said that they would ask for the cooperation of Islamic countries to help Africa.

Tens of thousands of people are suffering drought and famine in Somalia and head for refugee camps in Kenya and Ethiopia in search of food and water.

The World Food Program estimates that 10 million people already need humanitarian aid. The U.N. Children's Fund estimates that more than 2 million children are malnourished and in need of lifesaving action in the region.