Turkish speaking countries agreed to establish a cooperation council in their meeting in Nackhichevan last year. 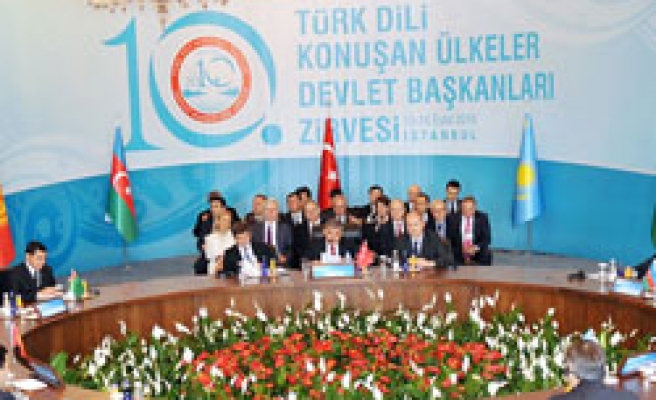 The Turkish Speaking Countries Heads of State and Government Summit began in Istanbul under the auspices of Turkey's President Abdullah Gul on Thursday.

"We will decide on the foundation principles of the Secretariat of Turkish Speaking Countries Cooperation Council in this meeting," Gul said during the opening session of the meeting.

Turkish speaking countries agreed to establish a cooperation council in their meeting in Nackhichevan last year.

"The secretariat will be in Istanbul, and we will appoint a secretary general," Gul said.

President Gul also said their common goal was to strengthen regional peace, stability and welfare as well as creating cooperation opportunities among the Turkish speaking countries.

Foreign ministers from Turkish speaking countries also had a meeting in Istanbul on Wednesday, on the eve of the summit of heads of state and government.

Making opening remarks of the meeting, Turkish Foreign Minister Ahmet Davutoglu said, "today, we attend a historic meeting in Istanbul. We are getting ready to establish the Secretariat General for Turkish Speaking Countries Cooperation Council in Istanbul. The secretariat general will carry out significant activities in the areas of education, culture and social life."

"Turkish Speaking Countries will be the rising power of the world in the coming period. Turkey is determined to support and contribute to these friendly countries in all platforms," he added.

Meanwhile, Davutoglu, earlier in the day, held a bilateral meeting with his Kazakh counterpart Kanat Saudabayev.

Meanwhile, Prime Minister Erdogan told reporters prior to the dinner that efforts were under way to remove visa proceedings between Turkey and Azerbaijan.

Upon a question about the Akdamar church in the eastern province of Van, Prime Minister Erdogan said, "this is the sign of Turkish people's tolerance. The church was restored and we allowed Armenian people to hold a religious rite at the church once in a year. We have the right to except the same tolerance from adherents of the other faiths. We believe that they will display the same tolerance and understanding."

I wonder why Uzbekistan is not there. It is a major Turkic-speaking country in Central Asia.