Ankara is concerned about reports that a Kurdish group linked to militants of the Kurdistan Workers Party is exerting control in Kurdish areas of northern Syria. 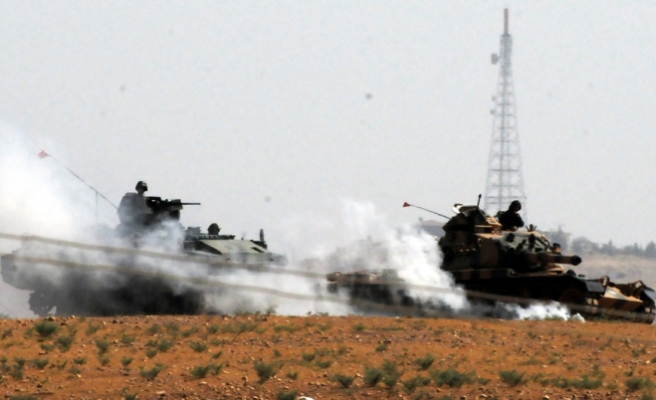 Turkey's army staged tank exercises near the Syrian border on Wednesday, Turkish officials said, in a move highlighting Ankara's unease about security on the frontier.

The exercises were held after a series of Turkish military deployments to the area prompted by the spiralling violence in the 17-month uprising against Syrian President Bashar al-Assad. There is no indication Turkish forces will cross the border.

Some 25 tanks took part in the exercises in the Nusaybin district of Mardin province, just 2 km (1 mile) from the Syrian border, state-run Anatolian news agency said, quoting Mardin's governor as saying they would last several days.

Nusaybin district official Murat Girgin, contacted by telephone, confirmed military exercises were underway in the area. He declined to elaborate.

The Syrian city of Qamishli is immediately across the border from Nusaybin. Ankara is concerned about reports that a Kurdish group linked to militants of the Kurdistan Workers Party (PKK) is exerting control in Kurdish areas of northern Syria.

NATO-member Turkey has warned any attack emanating from a PKK presence in northern Syria could give it reason to intervene. Ankara has repeatedly bombed and sent troops into parts of Kurdish-run northern Iraq where the PKK has camps.

Turkish Foreign Minister Ahmet Davutoglu is expected to raise the issue of the PKK presence in Syria on Wednesday with officials in northern Iraq, whose political factions Ankara has often pressured to take steps against the PKK.

The Syrian conflict was set to feature highly in the four-day meeting of Turkey's Supreme Military Council, which started on Wednesday. The council, chaired by Prime Minister Tayyip Erdogan and bringing together top commanders, meets twice yearly to discuss army promotions, retirements and expulsions.

The military manoeuvres coincided with intense clashes between the military and the PKK further east around the town of Semdinli, right on the mountainous border with Iraq and Iran. Media reports say up to 40 PKK militants have been killed in the clashes there over the last week.

In a separate clash in Diyarbakir province, two soldiers were killed in a firefight with PKK militants on Wednesday near the town of Lice, security sources said.