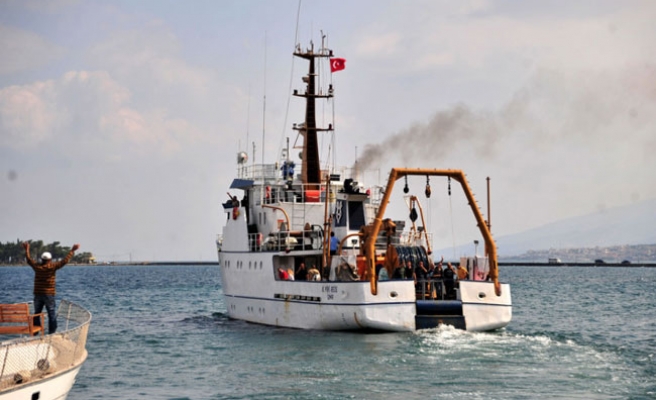 He did not give the exact location, but said the Piri Reis ship was working in "the AR/KKTC/G authorised zone". KKTC is the Turkish abbreviation for the Turkish Republic of Northern Cyprus.

A Greek Cypriot defence source said the Piri Reis was sailing in international waters south of the island earlier on Monday, about 80 km (50 miles) from the Noble Energy gas rig and between two plots Greek Cyprus has mapped out for future exploration. The Piri Reis left the Turkish Aegean port of Izmir on Sept. 23.

On September 21, Turkish Prime Minister Recep Tayyip Erdogan and TRNC President Dervis Eroglu signed in New York an agreement on the delineation of the continental shelf between two countries in the East Mediterranean following a Greek Cypriot move to start offshore drilling for natural gas and oil in the southeast of the Eastern Mediterranean island. On September 22, TRNC Council of Ministers gave exploration license to TPAO to explore oil and natural gas in the sea around Cyprus island.

Kucuk said that Turkish Cypriot side kept its constructive will to find solution to Cyprus problem as well as its determination to continue Cyprus negotiations.

Kucuk recalled that TRNC President Eroglu met UN Secretary General Ban Ki-moon in New York on September 24, and proposed to suspend oil and natural gas exploration until a comprehensive solution was found to Cyprus question or if Greek Cypriot administration insisted on oil exploration, then a committee shall be set up by the two sides in the island, and it shall decide how to share the richness that could be found after the explorations.

Unfortunately, Greek Cypriot side has not given a positive response yet, added Kucuk.

"Unilateral actions that create problems in the region should be avoided", Mosialos quoted Papandreou as saying.

An official from Erdogan's office said Erdogan had told Papandreou it would be better if gas exploration and extraction took place after a peace settlement had been reached on the island, and said unilateral actions could harm negotiations.

The two discussed holding a high-level meeting on Cyprus, possibly between end-October and mid-November. They had been due to meet at last week's U.N. general assembly in New York but Papandreou stayed in Athens because of the debt crisis.

Greece, Turkey ties have warmed in the past decade after a long history of enmity.