Premier Recep Tayyip Erdogan met with British Prime Minister David Cameron who is on a two-day official trip to Turkey. 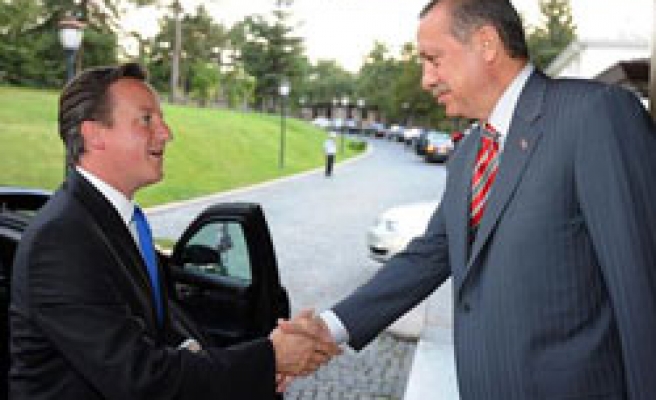 The private meeting at the Prime Ministry residence in Ankara which lasted 40 minutes was closed to the press.

Erdogan later hosted a dinner in honour of Cameron and the British delegation.

During Cameron's visit, Turkey and Britain will update and re-sign a strategic partnership document which expired.

The document was originally signed for a period of two years during Erdogan's visit to Britain in 2007.

British Prime Minister David Cameron will "promise" on Tuesday to fight for Turkey to join the European Union and will dismiss anti-Turkey members as protectionist or prejudiced.

France has taken the strongest stand against Turkish entry.

On his first visit to the country since becoming prime minister in May, Cameron will say Turkey would bring greater prosperity and political stability to the bloc thanks to its vast economic potential and growing influence in the Middle East and central Asia.

"So I will remain your strongest possible advocate for EU membership and for greater influence at the top table of European diplomacy. This is something I feel very passionately about," Cameron will say, according to excerpts from a speech provided in advance by British officials.

"Together, I want us to pave the road from Ankara to Brussels," he will say in the speech, to be delivered at the Union of Chambers of Commerce and Commodity Exchanges of Turkey, an influential business organisation.

The speech draws a parallel between Turkey and Britain, which was initially prevented from joining the EU by France's veto before finally entering the club in 1973.

"We know what it's like to be shut out of the club. But we also know that these things can change," he will say.

"When I think about what Turkey has done to defend Europe as a NATO ally, and what Turkey is doing today in Afghanistan alongside our European allies, it makes me angry that your progress towards EU membership can be frustrated in the way it has been," Cameron will say.

"My view is clear. I believe it's just wrong to say Turkey can guard the camp but not be allowed to sit inside the tent."

German Chancellor Angela Merkel, while less outspoken on the issue than Sarkozy, has appeared reluctant to embrace Turkish accession. Herman Van Rompuy spoke out against Turkey's bid to join before he became EU president.

Cameron's Conservative Party is staunchly opposed to closer political integration within the EU and sees the body primarily as a common market that should be dedicated to free trade.

Cameron will say in his speech that those who oppose Turkish accession fall into three categories: protectionists who see Turkey's growing economic power as a threat, "the polarised" who think the country should choose between East and West, and the prejudiced who misunderstand Islam.