Cameron promised to fight for Turkey to join the European Union and dismissed opponents of Turkish membership as protectionist or prejudiced. 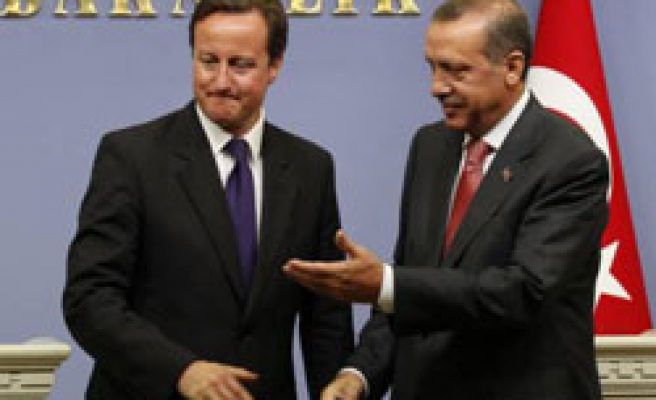 British Prime Minister David Cameron promised on Tuesday to fight for Turkey to join the European Union and dismissed opponents of Turkish membership as protectionist or prejudiced.

As Britain, we know what it means to be out of the (European) club. Yet we know that the status quo could change, Cameron said.

Turkey began the process of accession talks with the 27-member EU in 2005, but progress has been slow.

On his first visit to Ankara since becoming prime minister in May, Cameron said Turkey would bring greater prosperity and political stability to the bloc thanks to its vast economic potential and growing influence in the Middle East.

"This is something I feel very strongly, very passionately about. Together, I want us to pave the road from Ankara to Brussels," Cameron said in a speech to the Union of Chambers of Commerce and Commodity Exchanges of Turkey, an influential business group.

Cameron described Turkey as a fast-growing economic power that would be increasingly important and said this was a huge opportunity for British businesses. Britain's main trading partners are European countries with much slower growth rates.

"Today the value of our (bilateral Britain-Turkey) trade is over $9 billion a year. I want us to double this over the next five years," he said.

"The truth is that trade is the biggest wealth creator we've ever known, and when we talk about stimulus it is trade and a trade deal that can give our economies the stimulus they need right now," he said.

This was a pointed comment at a time when the coalition government headed by Cameron is preparing to slash public spending to reduce a record peacetime deficit. Critics say the cuts risk damaging a fragile recovery and bringing back recession.

Improving trade ties with fast-growing emerging markets is a central plank of the Cameron government's foreign policy. After Turkey, Cameron heads to India with a big delegation of business leaders and a similar message on the benefits of trade.

Cameron also stressed the importance of Turkey as a strategic partner with a presence in Afghanistan and the potential to influence diplomatic issues including Iran's nuclear programme and the Israeli-Palestinian conflict.

"No other country has the same potential to build understanding between Israel and the Arab world," he said, acknowledging that a deadly Israeli raid on an aid flotilla to Gaza had strained Turkish-Israeli relations.

"I urge Turkey, and Israel, not to give up on that friendship," he said.

"Gaza cannot and must not be allowed to remain a prison camp," he said, urging Turkey to help seek a solution.

Cameron said that in light of Turkey's unique importance in terms of security, diplomacy and economics, it angered him that its efforts to join the EU were being frustrated.

Cameron said those who oppose Turkish accession fell into three categories: protectionists who see Turkey's growing economic power as a threat, "the polarised" who think the country should choose between East and West, and the prejudiced who misunderstand Islam.