Members of an international fact-finding mission will pay a visit to Turkey to examine the Israeli attack on a Gaza-bound aid flotilla, Turkey's Foreign Ministry said on Sunday. 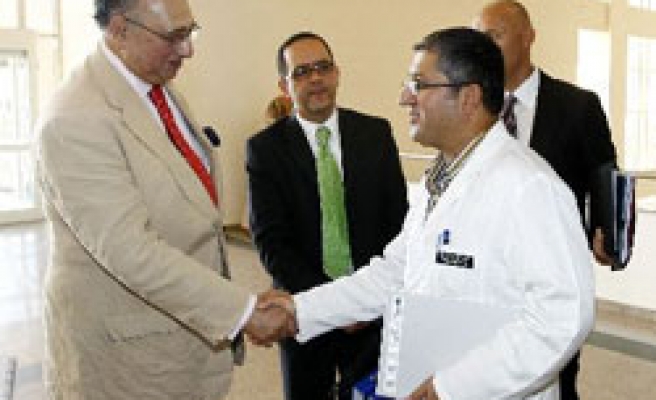 Members of an international fact-finding team established by the UN Human Rights Council began meeting with Turkish officials in Ankara on Monday as part of an investigation into an Israeli attack on an aid flotilla on May 31 that left nine activists dead.

Members of the UN panel met with President Abdullah Gul and Foreign Minister Ahmet Davutoglu on Monday and are due to travel to Istanbul and Iskenderun, where three Turkish ships that were part of the aid flotilla are currently docked, before completing their visit on Sunday, Aug. 29, according to a Foreign Ministry statement released late on Sunday.

The Foreign Ministry statement said the investigative team will meet with representatives from a national inquiry delegation set up by Turkey, hear witnesses of the Israeli raid, including those injured in the attack, and confer with officials from the Foreign Ministry and other relevant state institutions. The Foreign Ministry also pledged full cooperation with the UN panel, saying “all sorts of assistance and facilitation will be offered” to the team during its work.

Their final report on the May 31 raid, said the statement, “carries great importance in terms of shedding light on the facts about the incident.”

The UN Human Rights Council's investigation into the Israeli raid, which took place in international waters, is separate from a higher-profile UN probe announced by Secretary-General Ban Ki-moon. The 47-member council's probe was launched before Ban's announcement of the high-level panel earlier this month.

The president of the Geneva-based council, Sihasak Phuangketkeow, has dismissed claims that Ban's announcement made the Human Rights Council investigation superfluous, saying earlier this month that the fact-finding mission should proceed because there is a clear distinction between the missions and mandates of the two inquiries.

Israel has said it would work with Ban's panel, which is led by former New Zealand Prime Minister Geoffrey Palmer and outgoing Colombian President Alvaro Uribe and includes members from Turkey and Israel. But the Jewish state has previously refused to take part in council investigations. Sihasak said it would be "in the interest of Israel to do so."

Both teams are expected to publish their findings in September.

Israeli commandos trying to prevent activists from breaking its blockade of Gaza killed eight Turks and one Turkish-American during the raid on one of the flotilla's six vessels.

Turkey, on the other hand, is demanding an apology from Israel and compensation for the families of the victims.