Nuland claimed that the US would “facilitate the UN helping Turkey with the surge [in the number of refugees].” 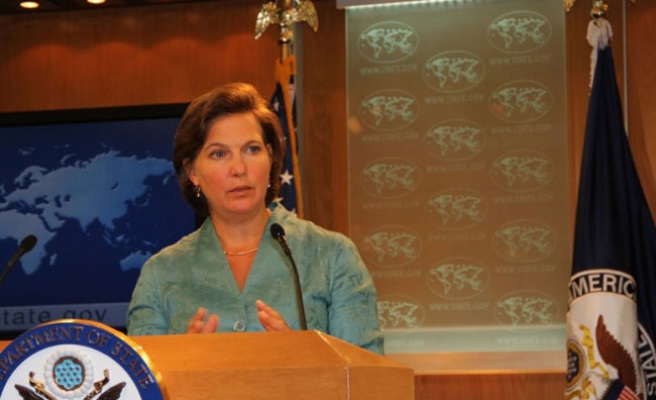 US Department of State spokesperson Victoria Nuland has stated that the US would help Turkey handle a possible refugee influx instead of supporting Turkey's proposal to bring a safe zone within Syria.

Foreign Minister Ahmet Davutoğlu participated in a UN Security Council meeting on Syrian refugees in New York on Thursday, during which he conveyed Turkey's views over setting up a security zone inside Syria. Turkey had said that the creation of such safe zones inside Syria would be necessary in the event that the number of refugees inside Turkey exceeded what the country says is “the psychological threshold of 100,000.”

“Our focus has been on helping and supporting Turkey to be able to expand the number of refugees that it can handle on its side of the border, to getting more UN help for Turkey,” Nuland claimed during a press conference in Washington. She maintained that keeping the refugees on Turkey's side would be “the best way to ensure safety and security” over the Syrian crisis.

The number of Syrian refugees in Turkey has reached 80,410, according to a written statement issued by the Prime Ministry's Disaster and Emergency Management Directorate (AFAD) on Wednesday. Turkey had requested that the international community share its burden in the face of a possible renewed influx of refugees.

Nuland claimed that the US would “facilitate the UN helping Turkey with the surge [in the number of refugees].”

“We are very much focused on supporting Turkey, in keeping the borders open and in being able to handle this increased refugee load. [Turkey] was focused early on on trying to do all this itself. It's now more open and accepting to UN help and we've been trying to facilitate the UN helping Turkey,” Nuland has stated.

Meanwhile, Turkey, though maintaining its open-border policy for Syrian refugees, has increased control over their admittance, prioritizing the injured and sick, due to security concerns. Around 7,000 people attempting to flee the violence in Syria are waiting at border gates to enter Turkey, hoping to be admitted over the next few days.

The Office of the UN High Commissioner for Refugees (UNHCR) has recently stated that the number of Syrian refugees in Turkey could reach 200,000 as the conflict deepens and many others could flee to Jordan.

Overall, 214,120 Syrians have been registered in four neighboring countries -- Jordan, Iraq, Lebanon and Turkey -- exceeding the UNHCR'S forecast of 185,000 for this year.

Thursday's meeting was called by France, the council's term president, giving Turkey open support in establishing security zones inside Syria. Other than Turkey, the meeting also brought together Iraq, Lebanon and Jordan.

French President François Hollande claimed that the country is examining the buffer zone initiative proposed by Turkey in cooperation with the closest partners of France, during a meeting on Tuesday.

Meanwhile, French Defense Minister Jean-Yves Le Drian urged the international community last week to consider backing a no-fly zone over parts of Syria on the grounds that closing all of the Arab nation's airspace would bring about a confrontation with the Syrian government.