U.S. Secretary of State Hillary Clinton said "Our intelligence services, our military have very important responsibilities and roles to play so we are going to be setting up a working group to do exactly that" 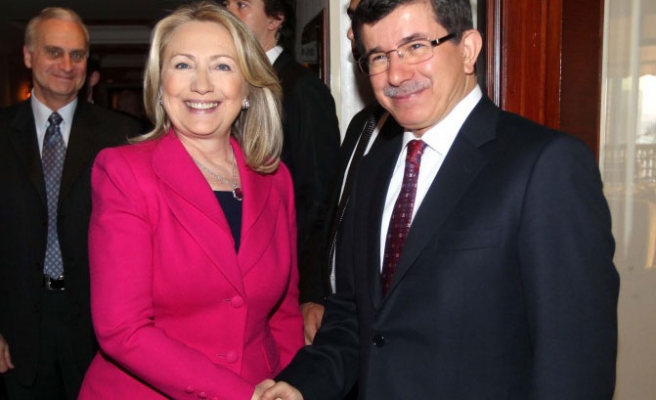 Turkish Foreign Minister Ahmet Davutoglu and US Secretary of State Hillary R. Clinton met Saturday in Istanbul, discussing the ongoing crisis in Syria. The meeting was held closed to news media and it lasted about 2.5 hours.

The United States and Turkey will expand operational planning for Syria, U.S. Secretary of State Hillary Clinton said, with both indicating no fly zones could be a possible option.

"We have been closely coordinating over the course of this conflict. But now we need to get into the real details of such operational planning and it needs to be across both of our governments," Clinton told reporters in Istanbul in a joint press conference with Ahmet Davutoglu.

"Our intelligence services, our military have very important responsibilities and roles to play so we are going to be setting up a working group to do exactly that," she added.

The United States and Turkey are considering imposing no-fly zones and other steps to help Syrian rebel forces as the conflict there deepens, U.S. Secretary of State Hillary Clinton said on Saturday.

Asked if such discussions included options such as imposing a no-fly zone over territory that Syrian rebels claim to control, Clinton indicated that was a possible option.

"The issues you posed within your question are exactly the ones the minister and I agreed need greater in-depth analysis," Clinton answered, although she indicated no decisions were necessarily imminent.

"It is one thing to talk about all kinds of potential actions, but you cannot make reasoned decisions without doing intense analysis and operational planning," she said.

The imposition of no-fly zones by foreign powers were crucial in helping Libyan rebels overthrow Muammar Gaddafi last year. But until recently, the United States and its European allies have expressed reluctance to take on an overt military role in Syria's 17-month-old conflict.

The rebels are believed to be getting arms from Saudi Arabia and Qatar but only non-lethal assistance from the United States.

Davutoglu, responding to a similar question, said it was time for outside powers to take decisive steps to resolve the humanitarian crisis in cities such as Aleppo, which is under daily Syrian government bombardment.