The report called for more effort especially in sub-Saharan Africa and Southern and Western Asia to reduce the hungry share of the population in developing countries to 11.7 percent 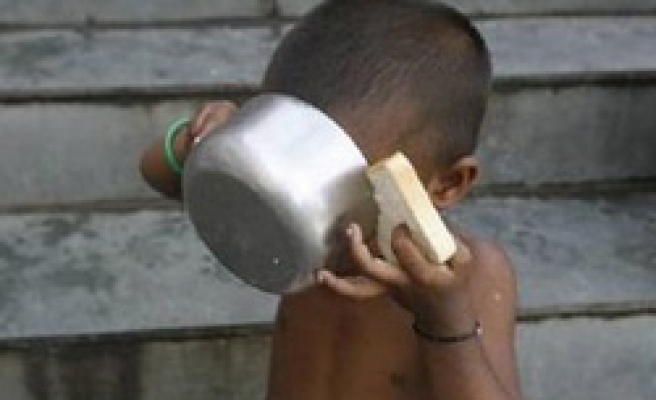 The number of hungry people in the world has fallen sharply over the past decade but 805 million, or one in nine of the global population, still do not have enough to eat, three U.N. food and agriculture agencies said on Tuesday.

The number of chronically undernourished people dropped by more than 100 million, equivalent to a country the size of the Philippines, according to a report by the United Nations food agency (FAO), International Fund for Agricultural Development (IFAD) and World Food Programme (WFP).

Government drives to improve nutrition have helped the developing world move towards a U.N. goal of halving the number of people suffering from hunger between 1990 and 2015, said the report entitled "The State of Food Insecurity in the World".

But success stories such as Brazil mask struggles in countries like Haiti, where the number of hungry people rose from 4.4 million in 1990-92 to 5.3 million in 2012-14.

"We cannot celebrate yet because we must reach 805 million people without enough food for a healthy and productive life," WFP executive director Ertharin Cousin said in Rome.

The Ebola virus threatens food security in western Africa, while conflicts in places including Iraq and Syria have meant that people who once had enough food could lose reliable supplies "in just a matter of weeks", she said.

The ambitious goal to halve the absolute number of chronically undernourished people between 1990 and 2015 has been met by 25 developing countries, but there is not enough time for the whole world to get there by next year, the report said.

Brazil, Indonesia and Malawi, among others, have already achieved the development goal by halving the undernourished proportion of their populations through investments and policymaking in areas from agriculture to school meals.

But the agencies urged more efforts elsewhere, especially in sub-Saharan Africa and southern and western Asia, to reduce the hungry share of the population in developing countries to 11.7 percent, from 13.5 percent today, by the end of 2015.

Ebola, which has killed more than 2,400 people this year, endangered harvests and sent food prices soaring in West Africa, is rapidly creating a major food crisis there, Cousin said.

FAO issued a food security alert this month for Liberia, Sierra Leone and Guinea, which were all net cereal importers even before the Ebola outbreak prompted border closures and quarantine zones, contributing to farm labour shortages.

Ongoing conflicts in Syria, South Sudan and the Central African Republic are preventing humanitarian efforts to help people affected, Cousin said, adding that WFP and other agencies needed an increase in donations.

Meanwhile, the advance of ISIL fighters in Northern Iraq has caused concern over the availability of wheat, which FAO says is the most important food grain for humans.

"We are concerned about the fact that (ISIL) controls two of the major grain facilities in the country," Cousin said. "These are very worrying trends, when you have a party that can control the food that is required by the poorest in the country."

But this is not necessarily good news for the world's poor and hungry, FAO director general Jose Graziano Da Silva said, in part because farmers earn less from their crops.

"Low prices do not ensure that the poorest will get more food," he said. "If there is not ... access, low prices will not be enough."