Bus drivers and metro workers launched a strike to protest against the measures on Tuesday with tax collectors and some Finance Ministry officials starting a 48-hour stoppage. 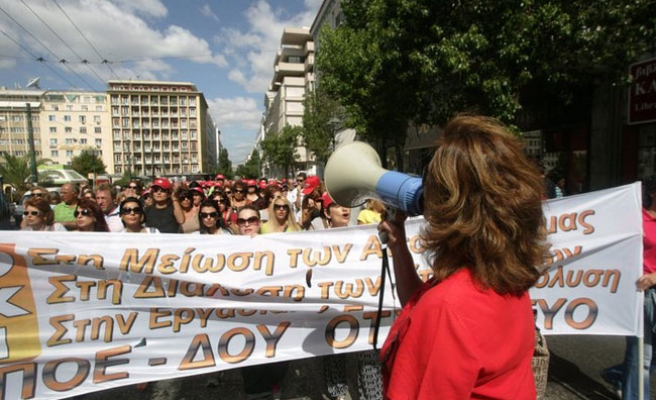 The Greek parliament is expected to approve a deeply unpopular property tax on Tuesday to lure international lending inspectors back to Athens and release vital aid, even as demonstrators stepped up protests against more austerity.

The vote is an important first test of the nation's ability to push through a new wave of belt-tightening to persuade the IMF and EU that it deserves an 8-billion-euro ($11 billion) loan it needs to pay salaries and avoid bankruptcy next month.

"The decisions of July 21 are like an institutional Bible to us," Finance Minister Evangelos Venizelos said, underling his commitment to meet the targets of a new bailout deal agreed this summer. "They are the framework within which we move."

But ordinary Greeks are exasperated at more austerity misery. Bus drivers and metro workers launched a strike to protest against the measures on Tuesday with tax collectors and some Finance Ministry officials starting a 48-hour stoppage.

A column of garbage trucks and city workers on motorcycles drove slowly in front of parliament honking horns in the ancient capital's Syntagma Square, where about 100 people were injured in bloody clashes between protesters and police in June.

At the other end of the square, hundreds of activists waving banners saying "No New Cuts!" and chanting "Take Your Bailout and Go Away!" marched on the Finance Ministry, which was cordoned off by riot police, where Venizelos was speaking.

Having grown increasingly impatient at the slow pace of reforms, a "troika" team from the IMF, EU and European Central Bank abruptly quit Greece this month threatening to cut off funds, prompting Athens to unveil an intensified strategy.

After Venizelos held talks with officials at a weekend IMF meeting in Washington, sources close to the troika said the team would return on Wednesday and resume the work of scrutinising Greece's fiscal books to approve the latest aid tranche.

Venizelos said Prime Minister George Papandreou would send a letter of written assurances demanded by the inspectors to show the government is totally committed to meeting its obligations and he was confident Greece would get its aid.

"The disbursement will take place and will take place on time," Venizelos told a news conference partially drowned out by whistling and shouting activists outside protesting ahead of the vote on the property tax.

"Let them come to my house, put me in jail. We have already gone bankrupt anyway."

The troika team has criticised the Athens government for dragging its feet on a promise to cut the 730,000 public workforce by a fifth and sell off loss-making state firms.

The government has also failed to end widespread tax evasion, while a third year of economic contraction has eroded budget revenues and undermined Greece's goal of cutting the budget deficit to 7.6 percent of annual output this year.

Responding to media reports that many state run organisations had missed a Sept. 26 deadline to name employees they can lose, Finance Ministry Secretary General Ilias Plaskovitis said there could be outright sackings -- anathema in Greece, where public jobs are protected by the constitution.

European leaders facing rising pressure from their domestic voters about footing a colossal bill for debt-laden states have objected to the idea of keeping Greece afloat if it does not fulfill its part of the bailout.

"If someone asks me -- what if the conditions are not met? I say -- then there cannot be any money," Austrian Chancellor Werner Faymann told a news conference.

Athens' slow pace of implementation coupled with European leaders' inability to erect a wider safety net have stoked fears a Greek default could bring down other euro zone states like Italy and Spain and trigger a new global recession.

Venizelos, a former defence minister known for his oratory and intellect, said signs of participation in a bond swap plan, a crucial part of Greece's efforts to cut costs tied to its 350-billion-euro debt mountain, were encouraging.

Greece hopes 90 percent of creditors holding shorter-dated bonds will switch them with papers of longer maturity and take a "haircut", or loss, of 21 percent on the paper, as outlined in a new bailout scheme agreed among Greece, private bondholders, and the EU and IMF in July.

German and French government advisers recommended Greece be allowed to write off around 50 percent of its debt, but Venizelos rejected the idea.

In its new austerity package to convince the troika, the government said it would cut public salaries and pensions, put 30,000 public contractors on notice and extend the property levy until 2014, two more years than planned.

Papandreou, whose socialist PASOK party has suffered a sharp drop in support since June and is well behind the conservative opposition in polls, was in Germany ahead of another key parliamentary vote there on Thursday meant to give more powers to the EU's EFSF bailout fund.

With German voters needing to be convinced about the reasons for the Greek bailout, Papandreou promised Greece would meet its commitments. "I promise you we Greeks will soon fight our way back to growth and prosperity after this period of pain," he said in a speech to German industry leaders.

Unhappy at imposing more pain on voters hit by tax hikes and spending cuts over the past 18 months, ruling lawmakers are nevertheless expected to toe the line to prevent a Greek default that would send tremors through the global system.

The government's majority has fallen to 154 out of parliament's 300 seats after one deputy was expelled from the party for voting against a previous austerity package in June when public protests raged on the steps of the assembly.

This time, no PASOK lawmaker has threatened to vote against the property tax, and political analysts also expect them to vote for other austerity steps as they emerge in coming weeks.