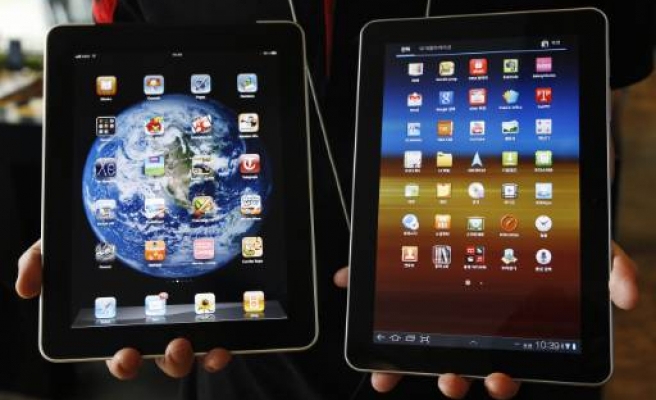 Apple Inc scored a big victory in its patent infringement battle against Samsung Electronics after a German court temporarily barred the Korean firm from selling its flagship Galaxy tablet in the European Union except the Netherlands.

The court order comes a week after Samsung was forced to delay the Australian launch of its latest Galaxy tablet because of a similar lawsuit.

Apple has said Samsung's Galaxy line of mobile phones and tablets "slavishly" copied the iPhone and iPad. It has sued in the United States, Australia and elsewhere. Samsung, whose tablets are based on Google Inc's Android software, has countersued Apple.

"There's no doubt the court decision will have an adverse effect on Samsung. Samsung is clashing with Apple in many places, which could result in a temporary fall in sales and increase costs related to litigation," said Lee Seung-woo, an analyst at Shinyoung Securities in Seoul.

Apple spokeswoman Kristin Huguet confirmed that a district court in the German city of Dusseldorf granted the preliminary injunction against the Galaxy Tab 10.1. It was not immediately clear why the order did not include the Netherlands.

"It's a strategy Apple has adopted to completely prevent Samsung from putting its tablet into the market place," said Nathan Mattock, an intellectual property lawyer at Marque Lawyers in Sydney.

Samsung's mobile unit, which includes handsets and tablet PCs, generated 30 percent of the technology giant's revenue in the second quarter. The bulk of the rest comes from memory chips and televisions, sectors where Samsung is the global leader.

By 0400 GMT, Samsung shares edged up 0.3 percent in a broader market up 0.7 percent after sharp falls over the past few days.

"The request for an injunction was filed with no notice to Samsung, and the order was issued without any hearing or presentation of evidence from Samsung," Samsung said.

Apple's move also raises the stakes for Google, which has accused its biggest rivals of banding together to hamper its increasingly popular Android, after it lost a bid to buy thousands of patents from bankrupt Nortel .

Without patents, companies' devices are vulnerable to challenges for royalties or, worse, demands from rivals to withdraw the products from the market place.

Samsung has been locked in a battle with Apple over smartphone and tablet patents since April. The Galaxy gadgets are seen as among the biggest challengers to Apple's mobile devices, which have achieved runaway success.

Apple sold 14 million iPads in the first half of this year worldwide, compared with analysts' sales estimates of about 7.5 million units for the Galaxy Tab over 2011.

Industry executives said Samsung could launch a new variation of the Galaxy Tab 10.1 to get it on sale in Europe, as it plans to do in Australia, or settle the dispute by paying royalties to Apple.

"This will be an issue that will get settled between the two companies. Some deal will likely get made and then they will move on ," said Peter Elston, Singapore-based Asia strategist at Aberdeen Asset Management Asia, which owns Samsung shares.

In Australia, Samsung has agreed to show Apple an Australian version of the Galaxy Tab 10.1 one week before its launch there, a Samsung spokesman said.

"They are way ahead of anybody else in that market and that is where they generate their super-normal profits," he said.

Apple is one participant in a web of litigation among phone makers and software firms over who owns patents used in smartphones, as rivals aggressively rush into the smartphone and tablet market.

Complicating things for the two tech giants is the pair's $5 billion-plus commercial relationship, which some analysts think might be at risk. Samsung, for instance, counts Apple as its biggest customer, making chips and other parts central to Apple's mobile devices.

"Samsung's collision with Apple in the mobile arena could have a spillover effect on other businesses such as chips," said Lee.

The well-reviewed Galaxy Tab 10.1 was only recently launched in Europe and is in the early stages of being rolled out. For now, the iPad is the market leader. Samsung launched its latest tablet in the United States in June.

Competing products including Research In Motion's PlayBook and Motorola's Xoom have received lukewarm reviews, while Hewlett Packard's TouchPad is a late entrant in the market, which already has more than 100 devices, mostly running on Android.

"One of the conditions of doing that is that if Apple is wrong it will have to pay Samsung a considerable amount of damages for all of its lost business and income that may have occurred in the period, so it's potentially quite a risky strategy," said Mattock.