Federal Reserve made an unprecedented pledge to keep interest rates near zero for at least two years, stemming a global equity rout for the time being. 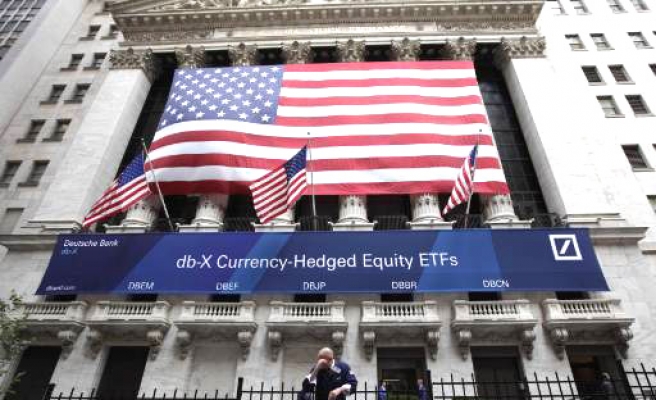 Asian stocks clawed back some lost ground on Wednesday, following a rebound in U.S. shares, after the Federal Reserve made an unprecedented pledge to keep interest rates near zero for at least two years, stemming a global equity rout for the time being.

In Europe, Eurostoxx 50 futures rose 1.2 percent and financial bookmakers were calling the FTSE 100 up 0.8 percent , but S&P 500 futures fell 0.2 percent , suggesting at least a pause in Wall Street's sharp rally.

"It's possible the bottom has been met but it is too early to say so," said Albert Hung, chief investment officer at Sydney-based Alleron Investment Management.

"Normally when you see this sort of movement you need another two weeks to be sure the bottom has been found."

Investors remained wary about the implication of the Fed's move -- that it expects the U.S. economy to remain weak far longer than previously forecast -- and this supported demand for safe havens such as gold and the Swiss franc.

"Volatility is calming down from an extreme level. Clearly there's going to be considerable concerns still, but the market had gotten seriously carried away and gone to an extreme of fear," said Greg Gibbs, strategist at RBS in Sydney.

World stock markets had been tumbling since the start of August on fears of a slide back into recession for the United States, reinforced by a downgrade of the U.S. credit rating on Friday, and the ever-expanding euro zone debt crisis.

MSCI's all-country world stock index remained about 16 percent below its May peak on Wednesday, after slipping as far as 20 percent, the generally accepted definition of a bear market, on Tuesday.

Tokyo's Nikkei rose 1.1 percent and MSCI's broadest index of Asia Pacific shares outside Japan gained 2.9 percent , led by the materials sector, which jumped more than 3.5 percent . The benchmark has fallen around 12 percent in August.

While the U.S. downgrade from Standard & Poor's was a big symbolic blow, investor confidence has also been shaken by data suggesting the world's biggest economy was stalling and even second-ranked China was facing headwinds.

There was some reassurance from China on Wednesday, with data showing export growth accelerated in July, outpacing analysts' consensus forecasts.

But whilst the numbers demonstrated that China is not dependent just on demand from the United States, few doubt that a "double dip" in the developed world would hit Asia.

"The economic reality is that if the U.S. enters into a recession, then no matter how strong growth in China is, China will be negatively impacted," said Victor Shum, an analyst at energy consultancy Purvin and Gertz.

A Reuters poll showed Wall Street economists shortening the odds on the United States lapsing back into recession to around one-in-three, heightening expectations the Federal Reserve may launch another round of unconventional credit easing.

The Fed said on Tuesday that U.S. growth was proving considerably weaker than expected, suggesting inflation will remain contained for the foreseeable future.

The central bank's decision on rates is likely to be good news for the so-called carry trade, in which traders use cheap dollar loans to fund buying riskier, higher-yielding assets.

"Once volatility eases, they should be in business until at least mid-2013," wrote Rabobank analyst Philip Marey in a report.

Against the Swiss franc, the dollar rose about 0.5 percent to around 0.7250 francs , having plunged 6 percent at one stage on Tuesday to a record low around 0.7067.

Continued strength in the Swiss franc and yen keeps alive the prospect of further intervention by the Swiss and Japanese authorities, after both took steps to weaken their currencies last week.

Gold was steady around $1,744 an ounce, after striking the latest in a string of records around $1,778 on Tuesday.

U.S. crude oil climbed back above $80 a barrel, rising about 3 percent to trade around $81.65 , while London metal exchange three-month copper rose around 2 percent, climbing back towards $9,000 a tonne. [ O/R]

"The Fed statement will give a boost to overall commodity markets as it is more like injecting confidence into the markets," said Ker Chung Yang, an analyst at Phillip Futures in Singapore. "But there are uncertainties over U.S. economic growth and China."