MSCI's broadest index of Asia Pacific shares outside Japan was down 2.2 percent, having earlier fallen as much as 3 percent to its lowest level since May 2010. 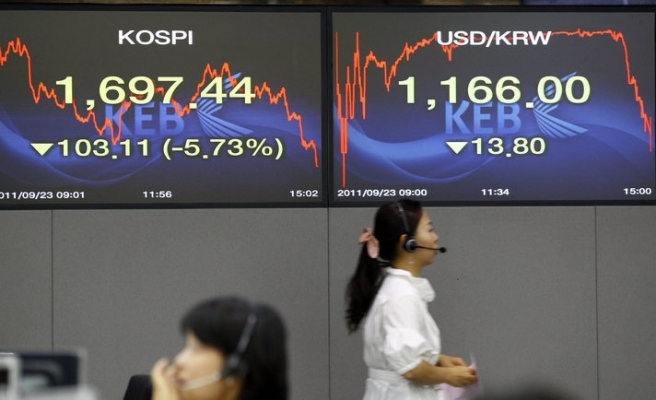 Asian stocks slid to a 16-month low and emerging market currencies fell on Friday amid fears that the developed world is stumbling back into recession, while a pledge from the G20 to preserve financial stability left investors largely unimpressed.

Equity markets pulled back from the depths of their slump and profit-taking lifted the euro after a statement committed the Group of 20 major economies to "take all necessary actions" and said central banks stood ready to provide liquidity.

But market players said any market bounce would likely be short-lived.

"There is nothing new, nothing substantial where we can grasp and say this is good, now we can put on some risk again. I don't think it changes the bigger picture," said Jesper Bargmann, Asia head of G11 spot FX for RBS in Singapore.

Alarm at the U.S. Federal Reserve's dire outlook for the world's biggest economy at its two-day policy meeting this week pushed world stocks to 13-month lows as investors shed risky assets from portfolios and scurried to safer havens.

MSCI's broadest index of Asia Pacific shares outside Japan was down 2.2 percent, having earlier fallen as much as 3 percent to its lowest level since May 2010.

European stocks were expected to bounce after falls of nearly 5 percent on Thursday, with financial spreadbetter calling the major indexes in London, Paris and Frankfurt up 0.8-1.5 percent. Tokyo markets were closed for a holiday.

The G20 statement came as finance ministers and central bankers met in Washington, under pressure from investors to show action in the face of rising stresses in the financial system.

Several European banks have seen their share prices tumble and their cost of funding rise as investors worried about their exposure to debt issued by Greece and other debt-heavy euro zone countries.

Global stocks as measured by MSCI's All-Country World index are now in bear market territory -- often defined as a fall of 20 percent or more -- having fallen 22.9 percent from their 2011 high in May.

Asian stocks have broadly unperformed since a global rout in early August, with MSCI's regional ex-Japan index 27.5 percent below its year high, reached in April.

Khiem Do, head of Asian multi-asset strategy with Baring Asset Management in Hong Kong, said the under performance was more due to investors sitting on the sidelines in cash or bonds rather than actively dumping Asian stocks.

"It's difficult to say, because it's a lack of buyers, rather than a lot of selling, so prices are marked down because the U.S. market or European markets are down overnight," he told Reuters Insider TV.

"But I don't think we're seeing a massive amount of liquidation of Asian equities over the past one or two weeks. According to the official stats there has been some net selling, but the actually amounts are quite small."

The euro climbed by as much as 0.8 percent earlier after Jiji news agency reported that Group of 20 officials were working toward an emergency statement, stirring hopes for action to soothe jitters over the euro zone's debt crisis.

The beleaguered single currency remained up on the day after the G20 pledged to support banks, trading up around 0.4 percent at $1.3510 .

S&P 500 futures stabilised and were trading up 0.9 percent, suggesting Wall Street stocks would open up later after a drop on Thursday of around 3 percent -- the second in as many days.

Despite their better growth prospects than the indebted West, Asia's emerging markets have been hit hard by the sell-off, partly due to fund managers closing out profitable positions to cover losses elsewhere in their portfolios.

South Korea, where the main stock index fell more than 4 percent, became the latest emerging economy to pledge action to stem its falling currency on Friday after Brazil moved to protect its currency from a sharp slide, in what appeared to be a sudden shift in strategy.

"It's a rush for the exits," said a currency trader. "Investors spent 18 months building positions in these emerging markets and they're trying to get out of them in 18 hours."

"It is just a short-covering rally that we are seeing today," said Jonathan Barratt, managing director for Commodity Broking Services in Sydney. "Otherwise, the overall direction is weak. Oil has been moving in line with equities."

Gold, which hit a record above $1,920 an ounce earlier this month, has been losing out as the safe-haven asset of choice in recent weeks as investors put their faith in the dollar and U.S. Treasuries, which in turn have made the precious metal more expensive for holders of other currencies.

Gold rose around 0.4 percent on Friday to around $1,742 an ounce, but remained on track for its third straight week of losses.

"The dollar has strengthened in all of this and everyone is de-risking and putting money into the dollar because of the deteriorating economic outlook," said Soozhana Choi, head of commodity research in Asia at Deutsche Bank in Singapore.

"We saw massive de-risking across the board, and gold as well as other commodities weren't unscathed."