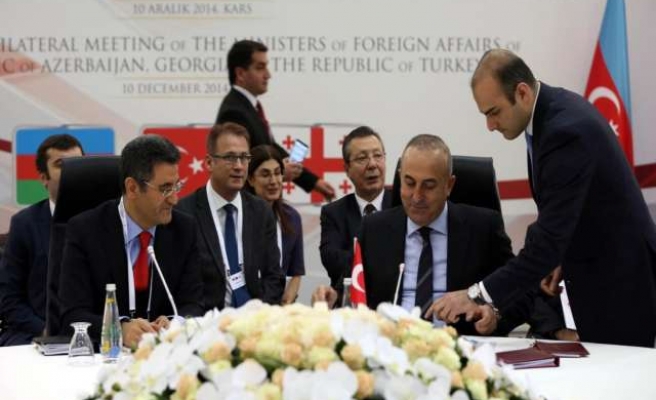 Speaking at a joint press conference following the meeting, Cavusoglu said one of the basic principles of Turkish foreign policy is protecting and promoting universal human rights values. He referred to Human Rights Day, which the UN designated Dec.10 each year.

"Unfortunately, there is no respect for human rights in some countries in the world," said Cavusoglu.

He also said Turkey supports respect for Azerbaijani and Georgian territories, adding that he hopes Armenia will also cooperate.

"Armenia should make sincere steps to solve the problems with its neighbors," Cavusoglu said.

Azerbaijan and Armenia, two former Soviet republics, fought a war over the disputed Nagorno-Karabakh region in the 1990s.

Turkey has supported Azerbaijan in its struggle against Armenia over the disputed region and aims to find a peaceful solution to the conflict that has been ongoing for 20 years. Efforts have, so far, failed and the two countries remain without diplomatic relations.

Azerbaijani Foreign Minister Mammadyarov also said problems between Azerbaijan and Armenia have yet to be solved.

"International agreements should be the basis for a solution," said Mammadyarov.

He also said the agreement signed between Russia and the self-proclaimed Republic of Abkhazia infringes Georgia's territorial rights.

"International security can be ensured through complying with provisions of international law," Beruchashvili added.

Russia and the self-proclaimed independent area in Georgia signed a strategic alliance agreement on Nov. 24, which includes a controversial collective defense pact. The agreement states that within three years, Russia and Abkhazia will establish a joint military force. The Russian army has pledged to modernize the Abkhazian forces.

Abkhazia declared its independence from Georgia in 1999, with Russia formally recognizing it in 2008, following a six-day Russian-Georgian war over the South Ossetia.