The job cuts are a blow to the Conservative-led coalition government which is seeking to rebalance the economy away from an over-reliance on financial services jobs in the overheated south-east of England. 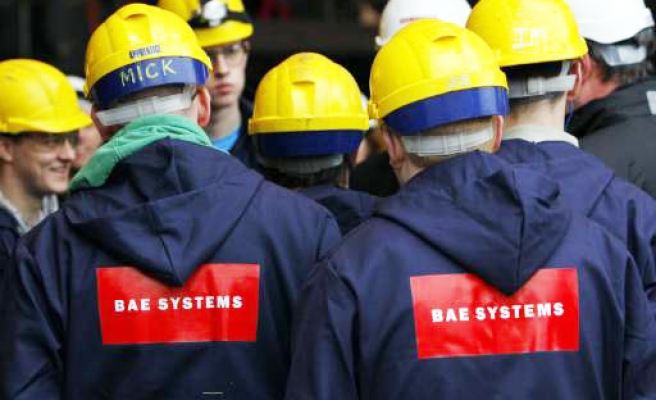 Europe's biggest defence contractor BAE Systems said it will cut up to 3,000 jobs in Britain as smaller global defence budgets hit orders for its fighter jets.

The company, which is Britain's biggest manufacturer, said the four partner nations in the Eurofighter Typhoon programme -- the UK, Germany, Italy and Spain -- were slowing production rates to help ease their budget pressures, affecting the workload at a number of sites.

"Pressure on the U.S. defence budget and top level programme changes mean the anticipated increase in F-35 production rates will be slower than originally planned, again impacting on our expected workload," said BAE in a statement on Tuesday.

The job cuts are a blow to the Conservative-led coalition government which is seeking to rebalance the economy away from an over-reliance on financial services jobs in the overheated south-east of England.

Critics of the government say its austerity programme is choking off growth and risks plunging the country back into another recession.

"The government cannot sit on its hands and allow these highly skilled jobs to disappear," it said.

"BAE Systems have dealt a hammer blow to the UK defence industry and Unite is determined to fight the cuts."

Most of the job losses will come at two of BAE System's plants in northern England -- one in Warton, Lancashire and the other in Brough, East Yorkshire.

BAE said it had begun consultation on ending manufacturing capability at Brough.

The company, which has already laid off around 15,000 employees worldwide over the last two years, reported a decline in first half pretax profit in July.

The U.S. defence department is cutting at least $350 billion from previously projected spending, and additional cuts could kick in if Congress fails to find more deficit reductions by year-end.

Britain, meanwhile, slashed its defence budget by 8 percent last year to help reduce its deficit, hitting BAE, which makes around a fifth of its revenue in the UK.

BAE Systems has a 33 percent stake in the Eurofighter joint venture company alongside EADS and Finmeccanica and had received orders for 550 planes from the four partner nations involved.

The company is continuing to pursue Typhoon sales in India, Japan, Oman and Malaysia and has said exporting the fighter aircraft remains a priority.

British and U.S. arms suppliers have been battling to win new business in emerging defence markets as they look to offset the belt-tightening at home.