Bank of America to sell China bank stake for $8.3 billion

Bank of America needs to boost capital by some $50 billion in the coming years to meet new global rules, according to multiple analyst estimates. 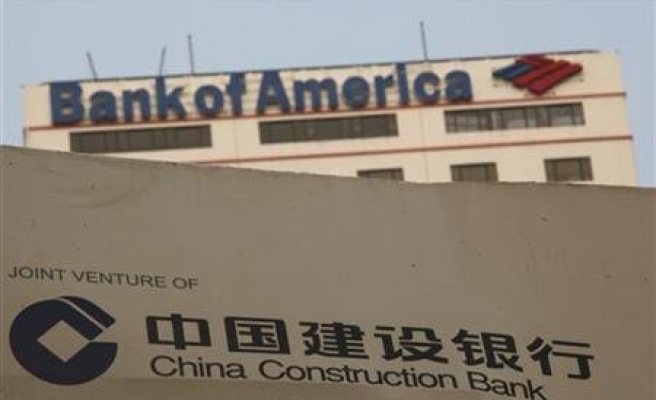 Bank of America Corp is selling about half its stake in China Construction Bank for $8.3 billion, in its latest effort to shed assets and boost capital.

A group of investors is buying 13.1 billion CCB shares from Bank of America, with the deal expected to close in the third quarter. The U.S. bank declined to name the investors but two sources said Singapore state fund Temasek was among the buyers.

Bank of America needs to boost capital by some $50 billion in the coming years to meet new global rules, according to multiple analyst estimates.

CCB is the second-largest bank by market value in the world, and Bank of America's ties with the Chinese bank are seen as an important source of future growth, particularly as economic growth in the United States is likely to be tepid for now.

Bank of America's willingness to sell part of its CCB investment as soon as it was contractually able to shows how far it must go to meet new capital requirements, analysts said.

"Bank of America's decision to sell that stake is wrong strategically in the long run, but they need money," said Josef Schuster, founder of Chicago-based IPO research and investment house IPOX Schuster.

The bank has said it can raise the capital it needs through earnings and selling off assets, but a number of investors have expressed concern that the bank will need to issue more common shares.

Those dilution concerns helped push the bank's shares this month to their lowest level in two-and-a-half years. Investors are also concerned about the bank's potential losses from mortgages and related litigation. Bank of America's 2008 purchase of Countrywide has brought it billions of dollars of losses and legal payouts.

Bank of America shares gained 8.1 percent to close at $8.39 on Monday.

For CCB, analysts said the sale helps soothe investor worries about when a sale might take place.

"This removes an uncertainty that's been hanging on China Construction Bank for a while now," said Ivan Li, deputy head of Hong Kong research at Kim Eng Securities.

In the CCB deal, Bank of America sold each share for HK$4.93, an 11 percent discount to the Chinese bank's most recent closing price of HK$5.55.

As lock-up provisions expire on a number of Chinese financial stocks, big investors will have the contractual right to start selling shares. Fears of those transactions have weighed on the sector, along with concerns about the Chinese economy's growth trajectory.

Bank of America will record a $3.3 billion gain in the third quarter as a result of the sale, and a $3.5 billion increase to its core capital under current rules, a spokesman said.

Under proposed Basel III rules, the sale will generate an $8.3 billion gain for Bank of America.

For Basel III, the bank's tier one capital levels after the deal are about 5.7 percent, while the bank is targeting somewhere around 6.75 percent or 7 percent by 2013, George said.

In recent weeks, Bank of America has also agreed to sell an $8.6 billion Canadian credit card portfolio to TD Bank Group and is in talks to sell $1 billion of real estate assets to Blackstone Group.

In the last six quarters, Bank of America has generated some $30 billion of proceeds from asset sales.

Fears about the bank's ability to meet its capital requirement have cut the bank's stock price by a third since the beginning of August, including a 20 pct plunge on August 8.

Tapping into growth in 2005

Temasek has a history of buying CCB shares. In November, it bought Bank of America's entitlement to buy 1.79 billion CCB shares in the Chinese bank's rights offering.

The Singapore fund has another link to Bank of America -- Greg Curl, the U.S. bank's former chief risk officer, is now president, overseeing the financial services sector for the fund.

At the time, then Bank of America Chief Executive Kenneth Lewis said the partnership was designed to give the bank increased access to roughly 1.3 billion Chinese consumers, while CCB would benefit from Bank of America's U.S. retail banking experience.

The U.S. bank increased its holdings in following years to 25.6 billion shares, including 23.6 billion that came out of lock-up on August 29. After the share sale, Bank of America will still have about 12.1 billion CCB shares, worth nearly $9 billion.