The Bank of Japan's governor also said it was keeping watch over a number of global issues, adding that an drawn out trade war between China and the US could affect the economy. 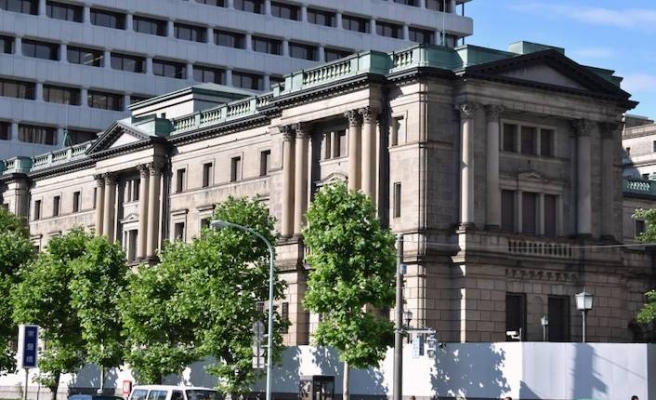 Japan's central bank revised down inflation forecasts again on Wednesday, in the latest sign it has failed to make headway towards its two percent target despite years of massive monetary easing.

After a two-day meeting it left its easing programme in place, as expected, and slightly lowered the inflation forecast for the fiscal year ending March 2019 to 0.9 percent from 1.1 percent.

The revision, in a quarterly report, comes after it earlier this year dropped a 2020 target for the long-standing goal.

"The momentum toward achieving the price stability target of 2.0 percent is maintained but is not yet sufficiently firm," the BoJ said in the report.

It also lowered forecasts for the coming years, projecting a 1.4 percent rate for fiscal 2019 and 1.5 percent for fiscal 2020.

Those figures do not factor in the effects of a consumption tax hike expected to go into effect around October next year.

He said the bank was carefully monitoring the China-US trade row but that its impact on Japan's economy was so far "limited" but he warned "if the conflict lingers, it is possible there will be more impact".

Other risks the bank is watching include the economy in Europe, Brexit negotiations and Italy's budgetary standoff with the European Union, he said.

The BoJ has struggled for years to reach the two inflation rate thought necessary to turbocharge Japan's economy, and has defended its decision to maintain its monetary easing even as other central banks tighten policy.

It blames a "deflation mindset" caused by consumers and employers used to long periods of low growth and deflation.

In its report it said companies remained "cautious" when setting prices and wages, with households similarly careful on spending.

The bank has been criticised for the consequences of its policy, including concerns that its massive purchases are skewing bond and financial markets.

In a nod to those concerns, it said in July it would seek to keep yields on benchmark 10-year government bonds around zero percent.

But there are no expectations that it will follow the lead of the US Federal Reserve and European Central Bank and move towards tightening.

In September, Kuroda said the bank had no plans to raise long-term interest rates "for quite a long time".

"We don't specify the period, such as whether it is one year, three years or five years," he told the Yomiuri Shimbun newspaper.

"It's a commitment that we will maintain the current low levels (of rates) as long as uncertainty lingers."