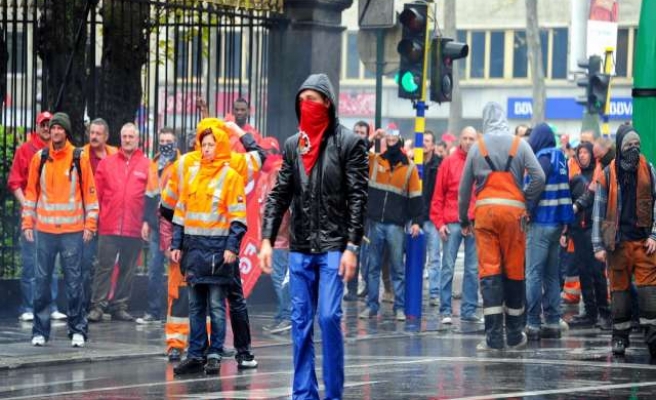 The recent large protests against Belgian government’s austerity measures may spread across Europe as the continent continues to experience high unemployment and weak economic growth, experts have told Anadolu Agency.

With the Belgian government declaring it will raise the retirement age from 65 to 67 by 2030 and force the long-term unemployed to work in return for benefits, 100,000 demonstrators took to the streets to vent their anger against the imposed "austerity measures" in Brussels on Nov. 6.

The demonstrators were also protesting against government plans to cut spending on healthcare and delay the indexation of wages in relation to prices.

Belgium's economy is expected to grow little more than one percent this year.

Holger Schmieding, the chief economist at Berenberg, a German multinational financial institution based in Hamburg, said: "Belgium is finally doing what it has to do to make its public finances sustainable. We are likely to see further protests, as we have in other countries over time."

'Fed up' with austerity

Schmieding noted that occasional protests in France, Italy and Greece were also likely to continue.

“But we do not expect these protests to get out of hand or cause a major reversal in policy,” he said

Peter Vanden Houte, chief economist at ING Belgium said that “after 7 years of crisis, people are fed up with reform and austerity”.

He said: "The risk is that this feeling will feed anti-European feelings, which is already very significant in countries like France and Italy.

"The risks to the stability of the Eurozone is therefore no longer financial, but political."

Meanwhile, recent gauges of EU growth have signaled that an already fragile recovery is slowing down.

The annual rate of inflation in Eurozone was 0.3 percent in October, a level which has intensified worries of it entering a period of deflation.

Compelled by weak economic figures, the bank left its interest rates unchanged at 0.05 percent in its last monetary policy meeting and started to conduct longer-term refinancing operations to the banks, a move which aims to increase lending to the private sector.

Separately, the European Commission cut growth and inflation forecasts for the Eurozone for 2015 on Nov. 4.

The currency bloc is predicted to grow only 1.1 percent next year, down from a forecast of 1.7 percent just six months ago.

"The economic and employment situation is not improving fast enough and we will put forward a €300 billion ($375 billion) investment plan to kick start and sustain economic recovery,” said Jyrki Katainen, the European Commission vice president for jobs and growth, in a statement.

The commission has called on member states to agree on plans to bolster demand with a significant spending effort to avoid a prolonged period of economic stagnation across the region.