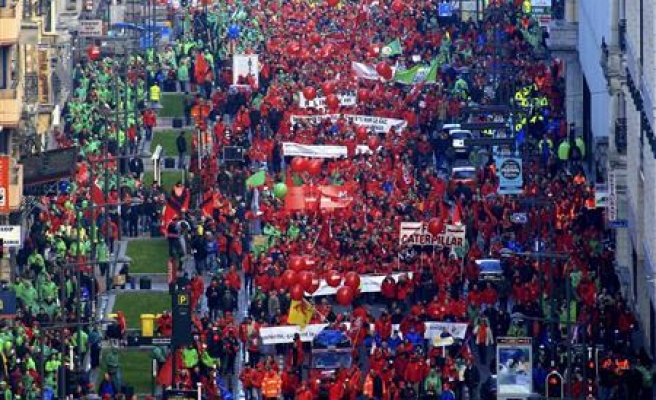 Lars is only 23-years-old, but says he is already worried about his future retirement.

With the Belgian government pledging to raise the retirement age from 65 to 67 by 2030 and force the long-term unemployed to work for their benefits, Lars, a Belgian working as a teacher at a primary school, was one of 100,000 workers who protested against austerity measures in Brussels on November 6.

The demonstrators also marched against government plans to also cut spending on healthcare and delay the indexation of wages in relation to prices.

Berta Sanders, a teacher in Brussels who is close to retirement, said: ''This government is taking from the people below the society and they do not take anything from the rich.''

The linguistically divided country – which has French, Flemish and German speakers – is facing a slow-moving economy, which is expected to grow little more than one percent this year.

Renault, a 55-year-old worker, said not only has his wages not grown in the last four years, they also will not rise in the next four.

He said he would normally retire in 10 years but now has to wait 12 because of the government’s plans to increase the retirement age.

''Take the money from the rich man and not from the poor worker,'' Renault said.

Belgium’s unions have called for a series of strikes every Monday, starting from Nov. 24, leading up to a general strike on Dec. 24.

Workers are angry at austerity measures in a country which has been called a "tax-haven" for the rich.

Belgian businessman Marc Coucke sold his health products provider Omega Pharma NV for €3.6 billion to American pharmaceutical company Perrigo, according to an announcement by the company on Nov.6.

The deal has sparked controversy as Coucke will not pay any taxes on the €1.6 billion he profited from through the transaction, as the Belgian government has rejected the idea of capital gains tax on the profit.

The austerity measures comes amid reports by the International Consortium of Investigative Journalists that Luxembourg secretly offered massive tax breaks to more than 1,000 transnational companies, including IKEA, Deutsche Bank and Pepsi.

Following disclosures of the report, EU spokesman Margaritis Schinas of the European Commission – EU’s executive body – said that an investigation was under way into Luxembourg's tax practices.

Luxembourg’s tax practice investigation is a blow to its former Prime Minister Jean-Claude Juncker, who took office as the new president of the European Commission on Nov.1, as the tax breaks were conducted during his terms of office as Prime Minister and Finance Minister in the tiny EU state.

European regulators also launched inquiries on June 11 into the tax practices of Apple, Starbucks and Fiat, on the basis that the companies had allegedly negotiated ''illegal'' deals with the governments in Ireland, the Netherlands and Luxembourg.

Former EC Commissioner for Competition, Joaquín Almunia, has called for a restraint on corporate tax planning and said all multinational companies should "pay their fair share".