Bernanke called for the U.S. government to beef up its assistance to the ailing housing sector, the epicenter of the 2008 financial meltdown. 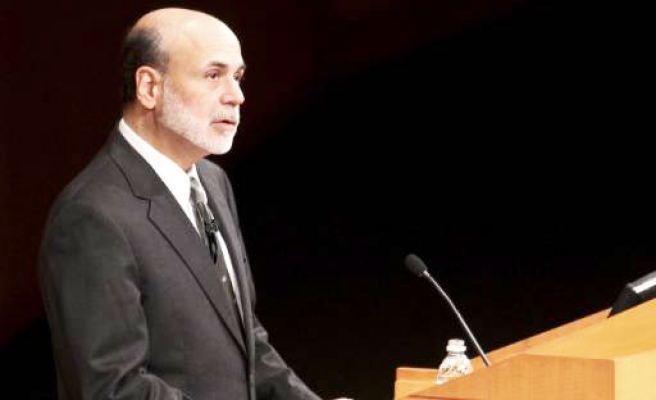 In his first public remarks since the Fed launched a fresh measure aimed at keeping down long-term borrowing costs, Bernanke indicated a willingness to push deeper into the realm of unconventional policy if economic growth remains anemic.

"It is something that we're going to be watching very carefully," Bernanke said in response to questions from the audience at a forum sponsored by the Cleveland Fed.

"If inflation falls too low or inflation expectations fall too low, that would be something we have to respond to because we do not want deflation," Bernanke said.

The comment was made in response to a question about a recent decline in market-based inflation expectations, which policymakers see as a good gauge of future inflation trends.

The gap between yields on 10-year Treasury notes and their inflation-protected counterparts fell to 1.70 percent last week, the lowest since September 2010. It has edged up slightly since then and last stood at 1.86 percent.

In an effort to stanch the deepest recession in generations and help the recovery, the Fed not only slashed benchmark interest rates to effectively zero, but also more than tripled its balance sheet to around $2.9 trillion.

Despite these measures, growth has remained quite soft, averaging less than 1 percent on an annual basis in the first half of the year. Bernanke signaled he remains concerned about risks to the economy, which the Fed described as "significant" in its September policy statement.

"We have a lot of problems both in terms of recovery and in terms of longer-term growth," he said.

U.S. Treasuries barely reacted in Asian trading to the possibility of more monetary accommodation from the Fed, not surprisingly since it has few options left and plenty of sceptics arguing that monetary policy will not help an economy struggling to create jobs.

Ten-year Treasuries were up about 1/32 in price to yield 1.981 percent , little changed from late U.S. trade on Wednesday.

"I feel that the market may gradually wake up to his comments," says Teppei Ino, a currency analyst at Bank of Tokyo-Mitsubishi UFJ.

Last week, the Fed said it will sell $400 billion in short-term Treasury securities and invest them into longer-dated ones to try to put downward pressure on borrowing costs over a longer period.

Investors have dubbed the program Operation Twist after a similar measure undertaken by the Fed in the 1960s. The central bank will also renew its help to the housing finance sector by reinvesting maturing mortgage bonds in its portfolio back into that market.

Bernanke called for the U.S. government to beef up its assistance to the ailing housing sector, the epicenter of the 2008 financial meltdown.

"Some strong housing policies to help the housing market recovery would clearly be very useful and would allow the monetary policy actions of the Fed ... to have more effect and to help the economy recovery more strongly," Bernanke said.

Asked about the fate of fallen mortgage giants Fannie Mae and Freddie Mac, Bernanke reiterated his view that the mortgage market remains too weak to allow the government to try to privatize the government-sponsored entities.

The Fed's latest monetary easing did not have unanimous support within the Federal Open Market Committee, which sets monetary policy.

Kansas City Fed President Thomas Hoenig, who does not have a vote on the committee this year but has been a vocal opponent of the Fed's unconventional policies, took a parting shot at the central bank's actions on Wednesday.

"When you encourage consumption by inhibiting your interest rates from rising to their equilibrium level, you will in fact buy problems, and we have, in fact, bought problems," said Hoenig, who is due to retire on Oct. 1, in his last speech in office.