A little more than a month ahead of general elections, new figures shows the Brazilian economy contracted by 0.6 percent in the second quarter of 2014 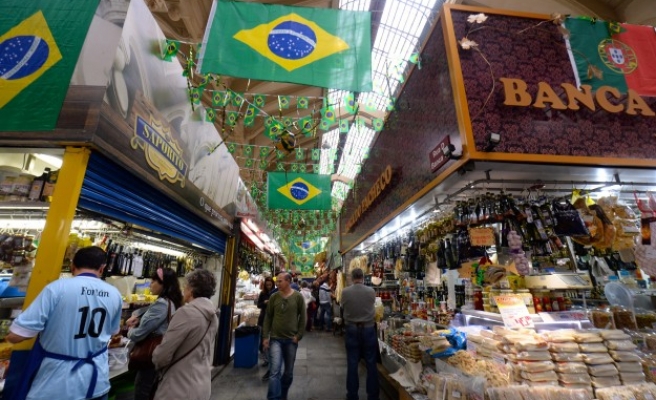 The Brazilian economy has fallen into recession a little more than a month before the country's general elections, according to figures released Friday by the country's national statistics agency, the IBGE.

Economic output fell 0.6 percent in the second quarter of 2014, compared to the first quarter, the agency said.

Previous figures indicated that the GDP had grown 0.2 percent between January and March, but the revised numbers show the economy had actually shrunk 0.2 percent in the first quarter, signaling a technical recession – defined as two consecutive quarters of negative growth.

The agency said although agriculture had expanded by 0.2 percent, industry and services fell by 1.5 percent and 0.5 percent, respectively.

When compared with the second quarter of 2013, GDP fell by 0.9 percent, but in the 12 months to June, GDP actually increased by 1.4 percent.

Agency analyst Rebeca de La Rocque Palis said a 5.3 percent drop in investments in comparison with the first quarter – 11.2 percent, year-on-year – was one of the biggest factors behind the drop in economic growth, according to the G1 news site.

She said the drop was seen most acutely in civil construction and the machinery production.

Family outgoings increased 0.3 percent in the second quarter of 2014, compared to the first, Valor Econômico reported. Exports were up by 2.8 percent, while imports shrank by 2.1 percent.

'Not really a recession'

Finance Minister Guido Mantega denied that Brazil was truly in recession, arguing the Brazilian economy was actually showing signs of "the opposite."

"Here [in Brazil] we are talking about two quarters and we know the economy is in flux. Recession is when there is unemployment on the up, and income falling in real terms. We have the opposite here," he told a press conference Friday.

The finance minister said true recession was what had been seen in "European countries," which had seen a "prolonged halt" to their economic growth and "several quarters with stalled GDP growth in a row."

Mantega pointed out that several "advanced economies," such as Germany and Japan, had also seen poor economic figures since the start of the year.

He said that the state of the global economy and droughts in Brazil were partly responsible for the poor performance of the Brazilian economy, as well as the impact of hosting the World Cup - and a reduction in the number of business days that it caused.

The news is a blow to incumbent President Dilma Rousseff who is seeking re-election in October's general elections. The economy is already seen as her weak point, something today's news will only compound.

Recent polls have predicted that although Rousseff, the Workers' Party candidate, would likely win in the first round of voting Oct. 5, an all-but-certain runoff Oct. 26 would see her lose to Socialist Party candidate Marina Silva.

Silva recently entered the race after Eduardo Campos died Aug. 13 in a plane crash, and now threatens to derail Rousseff's bid for re-election.

The president has been criticized by opponents over her handling of the economy, which is currently predicted by the government to grow just 1.8 percent in 2014. That's in stark contrast to the 7.5 percent growth seen in 2010, the year of her election.

Mantega said this year's forecasts would now have to be reviewed.

Market forecasts for 2014 economic growth have been cut repeatedly, and currently stand at 0.7 percent, according to the Central Bank.

Rousseff is unpopular with business figures due to what they see as her government's highly interventionist fiscal policy, which they blame for the economy's current sluggish performance and scaring off investors. She has not signaled this would change if she were re-elected.

Silva has attempted to allay fears that her past environmentalist stance would be bad for business, particularly among figures from Brazil's key agribusiness sector. The presidential candidate seen as more pro-business, Aécio Neves, of the Social Democracy Party, is currently polling third at 19 percent and risks being eliminated in the first round of voting.