Brazil may reject US fighter jet deal over spying scandal 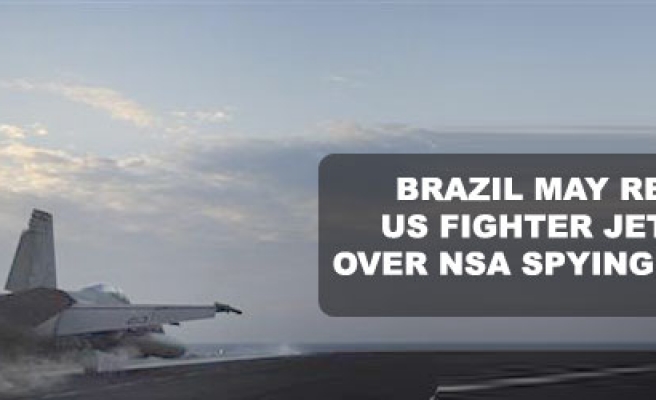 U.S. hopes of landing a coveted deal worth more than $4 billion to sell 36 fighter jets to Brazil have suffered a setback with recent revelations that the United States collected data on Brazilian Internet communications.

When U.S. Secretary of State John Kerry sits down with Brazilian officials in Brasilia on Tuesday to prepare a state visit to the White House by President Dilma Rousseff, the sale of the warplanes will not be on the agenda, a Brazilian source said.

"We cannot talk about the fighters now ... . You cannot give such a contract to a country that you do not trust," a high-level Brazilian government official told Reuters on condition of anonymity because of the sensitivity of the matter.

The official said Kerry's one-day visit to Brazil will focus on restoring the trust between Washington and Brasilia that was shaken by the spying disclosures, which set off a political uproar in the largest U.S. trade partner in South America.

Boeing Co is competing with its F/A-18 Super Hornet against France's Rafale made by Dassault Aviation and Sweden's Gripen made by Saab to win a contract worth at least $4 billion, with probable follow-up orders that would greatly increase the value of the contract over time.

That makes it a critical prize for defense companies at a moment when the United States and many European countries are tightening military budgets.

A senior U.S. official said Brazil's final decision should be based on which is the superior aircraft.

"We think we have the best product," he said of the F/A-18, adding that the United States has promised to transfer as much technology to Brazil as allowed under U.S. law regarding the fighter jet.

A Boeing spokeswoman declined to comment on the current state of play of its bid but said the Brazilian contract was a good business opportunity for the U.S. aircraft manufacturer.

Brazil has been debating the replacement of its ageing fighter jets for more than a decade, spanning three presidents. Rousseff appeared to be close to a decision earlier this year, with Boeing the clear favorite after the U.S. Air Force bought 20 light attack planes from Brazilian plane maker Embraer for use in Afghanistan.

Rousseff put off a decision on the fighter jets due to Brazil's economic slowdown and a deteriorating fiscal situation. The defense budget was slashed by 3.7 billion reais ($1.62 billion) in May and another 920 million reais last month.

The massive street protests that shook Brazil in June, fueled by widespread frustration with poor public services and corruption, put the spotlight on government spending and all but ruled out a big-ticket item such as the fighter jets.

"I don't expect the president to decide on the fighter contract this year, and next year is an election year so it might have to wait until 2015," said another government official involved in defense procurement policy.

The defense ministry, however, still hopes Rousseff will sign off on the new fighter jets before the end of this year.

The Brazilian Air Force has put pressure on the government to take a decision by announcing publicly that its French-made Mirage 2000s, which defend the Brazilian capital, will be obsolete and grounded on the last day of this year.

The Internet surveillance scandal set off by whistleblower Snowden has roiled relations between the two countries just as they seemed to be on a upward spiral under Rousseff, a pragmatic leftist.

Relations between Washington and Brasilia chilled under her predecessor and mentor Luiz Inacio Lula da Silva, who drew Brazil closer to Latin America's leftist governments and to Iran.

Rousseff's state visit on Oct. 23 is the only one that President Barack Obama is offering a foreign head of state this year, indicating the importance his administration is placing on closer ties with Latin America's largest nation.

Brazilian officials say they never considered cancelling Rousseff's visit and that they believe relations between the two countries are strong enough to put the spying case behind them.

But the Brazilian government wants a better explanation than it has got so far from Washington on what the NSA was up to and the extent of U.S. surveillance of Brazil's communications, the officials said.

The senior U.S. official said the United States was trying to work through its differences with Brazil over NSA issues while keeping other parts of the relationship on track.