Britain to ship $1 billion in banknotes to Libya

A portion of the funds amounting to around 280 million Libyan dinars, or around $234 million, reached Benghazi this week already by airplane. 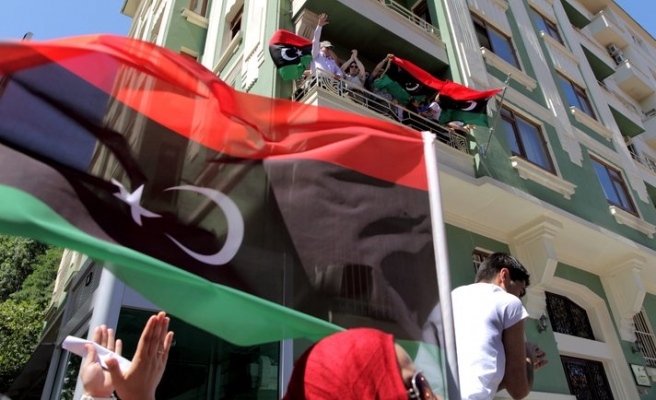 Britain will ship the remainder of $1.5 billion in frozen Libyan funds to Benghazi within a week, a senior official in the rebel government said on Friday, helping its new rulers to pay public workers and restore order in the war-torn country.

A portion of the funds amounting to around 280 million Libyan dinars, or around $234 million, reached Benghazi this week already by airplane.

The money is part of a consignment of freshly printed Libyan dinars worth about $1.5 billion ordered by Gaddafi from British printing firm De La Rue Plc but blocked by Britain in March after he began a violent crackdown on protests.

Many of the delivered notes still bear the face of the deposed leader, whose image elsewhere in the eastern city of Benghazi is openly mocked in graffiti.

"Most of it is coming by sea to Benghazi. It will come in a week's time and it will be the rest of the $1.5 billion," Fathi Baja, head of the National Transitional Council committee for political and international affairs told Reuters.

"We need lots of finances."

Now that NTC forces have overthrown Gaddafi, Britain is releasing the money to ease a cash crunch. The remainder will be delivered shortly, Foreign Secretary William Hague said.

A second NTC member told Reuters that the British money already received was now in the central bank vault and would soon be distributed to commercial banks.

"We need a portion of money in hard currency (non-Libyan) to open up credit to buy oil products. At the same time we need Libyan currency for banks to pay government salaries," said Mustafa el-Huni, NTC representative for Jufra in southern Libya.

The shortage of hard cash has been a problem throughout the conflict, with long lines often forming outside banks as people sought to take out their money.

International powers met in Paris on Thursday and agreed to make $15 billion immediately available to the new leaders, putting to the test their ability to govern and restore order in a country with beleaguered public services and a glut of heavy weapons. It is not clear yet how the money will be transferred to Libya.

"Education and security -- these will take a large chunk of the money," said Baja, referring to the $15 billion.

Libya's schools are due to start on Sept. 17, despite bombed-out classrooms, scarce transport and a curriculum based on Gaddafi's green book - an account of his views of the world.

A portion of the money would be allocated to giving medical care and limb replacements to victims of land mines.