Authorities in northeastern China ordered a petrochemical plant to be shut down immediately on Sunday after thousands of people demonstrated. 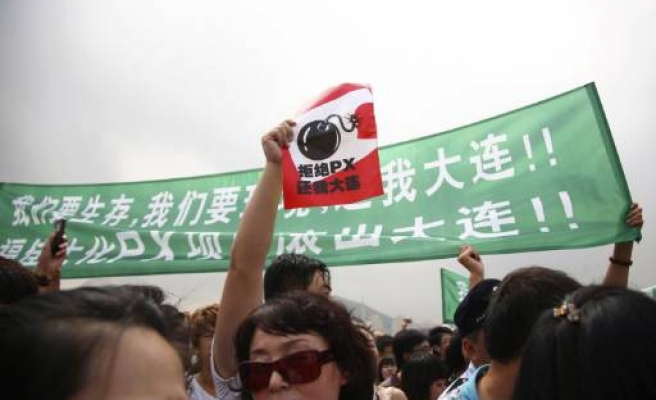 Authorities in northeastern China ordered a petrochemical plant to be shut down immediately on Sunday after thousands of people demonstrated, demanding the relocation of the factory at the centre of a toxic spill scare, state media said.

Demonstrators in the port city of Dalian, in Liaoning province, faced down a wall of riot police in front of the municipal government office, according to eyewitness accounts. Minor scuffles broke out, although there was no report of injuries among the 12,000 protesters, state news agency Xinhua said.

The authorities also pledged to relocate the Fujia Chemical Plant, Xinhua said, citing a statement from the municipal committee of the Communist Party and the government. The report did not say where the plant was likely to move to.

After the announcement, some of the protesters were seen leaving a packed public square in front of the city government offices and main urban streets, Xinhua said.

State media said last Monday that residents in Dalian were forced to flee when a storm battering the northeast Chinese coast whipped up waves that burst through a dyke protecting the Fujia plant, which makes paraxylene (PX), a toxic petrochemical used in polyester. .

Although authorities repaired the dyke and insisted that no spills were detected, the incident sparked panic that PX could have been released, fuelling resentment against the project. Calls on popular microblogging site Weibo and QQ, an instant messaging system, urged residents to protest on Sunday.

The outpouring of public anger is emblematic of the rising discontent facing Chinese leaders, who are obsessed with maintaining stability and struggling to balance growth with growing public anger over environmental threats and safety concerns, especially in the aftermath of the deadly high-speed train crash in late July that killed 40 people.

In a rare concession, Dalian's Communist Party chief Tang Jun and mayor Li Wancai earlier on Sunday "tried to appease the crowd by promising to move the polluting project out of the city", Xinhua said.

But protesters demanded a clear timetable for moving the plant, with some refusing to move until a timetable is established, Xinhua said.

Protesters including children marched holding banners that declared: "I love Dalian and reject poison", "return me my home and garden, get out PX, protect Dalian", and "Return my future generations' beautiful home", according to eyewitness accounts.

Photographs on Weibo showed a person in a gas mask wearing a T-shirt that said: "Brother wants to live a few more years". Xinhua said protesters threw bottles of mineral water at police who tried to cordon off the main road that passes near the square, but relented after police backed down.

"A poster was put on the Internet yesterday calling people to 'stroll' on Sunday morning starting from 10 a.m. on the People's Square, near which the Dalian government is located," a resident in Dalian, who declined to be named, told Reuters by telephone.

"We know that the typhoon caused some leak of poisonous chemicals from the PX project and we are all worrying about it, because it is a threat to our life," the resident said. "We hope that such a 'stroll' may push the government to do something as soon as possible to dispel our worries."

Group strolls have become one way for Chinese people to show discontent with the government.

Dalian, home to China's aircraft carrier and with about 6 million residents, is the second-biggest city in Liaoning, which recently suffered an oil spill from two offshore platforms that hurt tourism and aquatic farming businesses.

Environmental worries in China have stoked calls for expanded rights for citizens in the one-party state, but this protest has extended it to calls for more government accountability, highlighting the mistrust that Dalian residents have in its leaders.

According to Southern Metropolis News, the Fujia plant, a joint venture between the state-owned Dalian Chemical Group and the private real estate company Fujia Group, started full-scale production in June 2009, but it did not get the mandatory environmental approval from the Liaoning environmental protection bureau until April last year.

A photograph on Weibo showed crowds sitting in front of the government building, with some people holding a banner that said "stamp out corruption".

Chinese authorities, who are quick to suppress dissent from spreading, blocked searches on Weibo for "PX", "Dalian", and "Dalian protests". Search results for these terms showed pages that said "according to relevant laws, regulations and policies, search results are not displayed".

China's leaders have vowed to create a more "harmonious society" with cleaner air and water, even at the cost of slower economic growth.

But environmental disputes like these pit citizens against local officials whose priority often remains attracting fresh investment and revenue.

The plant, one of China's largest PX producers, can produce 700,000 tonnes of the compound annually, according to the company website. It contributes 2 billion yuan ($311 million) to the local government in the form of taxes every year, Xinhua said.

The Xiamen authorities in southern Fujian province were forced to scrap a similar PX project in 2008 after thousands of people in the city took to the streets in 2007.

The chemical PX can cause eye, nose or throat irritation and chronic exposure may result in death.

Environmental pollution is one of the major causes of social unrest in China, which had almost 90,000 such "mass incidents" of riots, protests, mass petitions and other acts of unrest in 2009, according to a 2011 study by two scholars from Nankai University in north China. Some estimates go even higher.