At a ceremony in Beijing's Great Hall of the People, Chinese and Spanish companies signed 14 deals in industries ranging from telecommunications to nuclear power to finance. 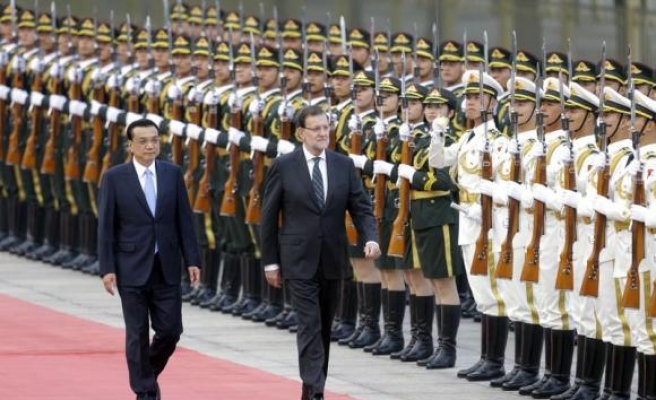 China and Spain signed business deals worth about 3.2 billion euros ($4 billion) on Thursday during a visit by Spanish Prime Minister Mariano Rajoy to the Asian powerhouse to drum up support for his country's economy.

At a ceremony in Beijing's Great Hall of the People, Chinese and Spanish companies signed 14 deals in industries ranging from telecommunications to nuclear power to finance.

Rajoy, who will meet Chinese President Xi Jinping on Friday, is the latest European leader to visit China to lure investment from the world's second-biggest economy.

He was welcomed to the capital by Premier Li Keqiang late on Thursday following a morning gathering of Chinese and Spanish business executives in Shanghai, where Rajoy called for Chinese investment in Spain, saying the Spanish economy was back on track after its problems during the euro zone debt crisis.

"Few countries offer such a good investment opportunity as Spain with its open and competitive market," Rajoy said in Spanish, adding that the food and consumer industries were areas where the companies of both countries could increase cooperation.

There was no word late on Thursday of a tie-up between Inditex and Alibaba despite reports in Spain that Rajoy was hoping to push through a partnership between the world's largest clothing retailer and the Chinese e-commerce company that now has a market capitalisation of more than $220 billion.

Spain is one of few economic brightspots in the euro zone this year. It grew at its fastest pace in six years in the second quarter, accelerating a recovery from an on-off recession that began in 2008 after a property bubble burst.

"As the world economy slowly recovers, trade between China and Spain has been growing against the trend this year," Li said during his meeting with Rajoy.

As China's economy matures, its companies are increasingly investing abroad in search of higher returns. By 2014, China's overseas direct investment is expected to exceed the direct investment it receives from foreign firms, the trade ministry said this month.