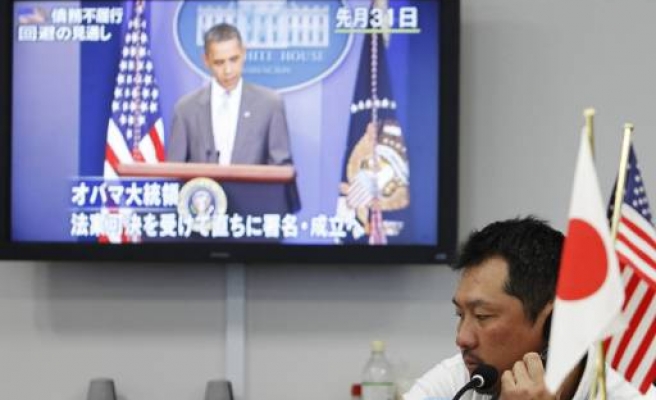 Investors are increasingly sceptical the debt debacle in the 17-nation currency area can be resolved. Credit markets are factoring in a 90 percent chance Greece will default on its debts and they demanded the highest risk premium on Italian five-year bonds at auction on Tuesday since the country joined the euro in 1999.

"What we have to take note of now is to prevent the sovereign debt crises from spreading and expanding further," Wen said on Wednesday.

Trying to contain the crisis, Italy is expected to approve a 54-billion-euro ($73 billion) austerity package on Wednesday, although news of the measures has so far done little to reverse investor alarm over whether the country can manage its debts.

Prime Minister Silvio Berlusconi's government has tabled a confidence motion which would force it to resign if it lost. An initial vote is scheduled for around 1200 GMT ahead of final approval of the austerity package around 1800 GMT.

A rebound in stock prices and the euro stalled in Asia on Wednesday as investors remained spooked about a crisis that has also roiled French banks because of their debt exposure to both Greece and Italy, raising fears of a fresh banking crisis.

A combination of a banking crisis akin to the global credit crunch, a Greek default and a financial meltdown in Italy could tear the euro zone apart.

"I think there is a possibility, if the wrong steps are taken, that the system goes off the rails," Sergio Marchionne, the CEO of Italian carmaker Fiat, told reporters in Frankfurt when asked if the euro's survival was at risk.

Merkel on Tuesday sought to quash talk of an imminent Greek default or its exit from the euro zone. Confused statements from Germany and France over whether they would issue a joint statement on Greece sent markets gyrating up and then down on Tuesday.

Greece has said it would run out of cash in a few weeks and needs an 8 billion euro tranche in October to pay wages and pensions.

Merkel said in a radio interview that Europe was doing everything in its power to avoid a Greek default and urged politicians in her own coalition to weigh their words carefully to avoid creating turmoil on financial markets.

Her economy minister said earlier this week there should be no taboos in stabilising the euro, including an orderly bankruptcy of Greece. And lawmakers from her coalition have said in recent days that Greece may have to leave the euro zone -- a move Citigroup's chief economist warned would lead to "financial and economic disaster."

"As soon as Greece has exited, we expect the markets will focus on the country or countries most likely to exit next from the euro area," Willem Buiter said in a note on Tuesday.

Merkel, in an interview with RBB inforadio, said Europe would use all the tools at its disposal to prevent a Greek default and warned that an exit from the bloc would immediately lead to "domino effects."

Wen didn't specify what steps China, with more than $3 trillion in foreign exchange reserves, might take to help Europe.

But a senior Brazilian source told Reuters on Tuesday that the so-called BRICS -- Brazil, Russia, India, China and South Africa -- were in early talks on increasing their holdings of euro-denominated debt to help ease the crisis.

"We've said countless times that China is willing to give a helping hand and we'll continue to invest there," Wen said in a speech at a World Economic Forum event in China.

He suggested though that the EU would have to reciprocate Beijing's help by moving to grant China "market economy" status, which would lower its exposure in trade to anti-dumping cases.

Obama told Spanish journalists in a group interview published on Tuesday that euro zone leaders needed to show markets they were taking responsibility for the debt crisis. Weakness in the global economy would persist so long as it is not resolved, he said.

In a measure of Washington's concern, Treasury Secretary Timothy Geithner will take the unprecedented step of attending a meeting of EU finance ministers in Poland on Friday.

It will be his second trip to Europe in a week after he met his main EU counterparts at a G7 meeting last weekend.

Obama said that while Greece is the immediate concern, an even bigger problem is what may happen should markets keep attacking the larger economies of Spain and Italy.

"In the end the big countries in Europe, the leaders in Europe must meet and take a decision on how to coordinate monetary integration with more effective coordinated fiscal policy," the news agency EFE quoted him as saying.

Geithner is likely to urge euro zone finance ministers on Friday to speed up ratification of changes to their bailout fund, but a U.S. official said he would not push for an increase in the fund's size.