HSBC's China Flash Purchasing Managers' Index, designed to give an early snapshot of the month's factory activity, dipped to 49.4 from August's final figure of 49.9. 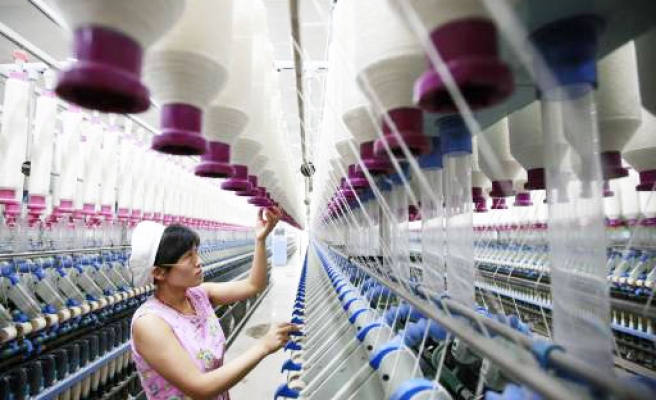 China's manufacturing sector contracted for a third consecutive month in September while a measure of inflation picked up, suggesting the world's No.2 economy may not be able to provide much of a counterweight to flagging U.S. and European growth.

HSBC's China Flash Purchasing Managers' Index, designed to give an early snapshot of the month's factory activity, dipped to 49.4 from August's final figure of 49.9. A reading below 50 indicates contraction.

Economists and Chinese officials have widely predicted China's growth will slow, largely because of waning exports. The country, known as the factory to the world, is especially vulnerable to fading demand from the United States and Europe, its two biggest export markets.

"The exports sector looks increasingly at risk given the shaky global fundamentals," said Connie Tse, an economist at FORECAST in Singapore.

While prospects dim abroad, demand has held up well at home. That should keep China's economic growth securely above 8 percent, the level that many economists see as the minimum required to generate enough jobs for the country's rapidly urbanizing population.

Back in 2008, when the global economy tipped into a deep recession, China's quick policy response was credited with helping to hasten the worldwide recovery. As long as inflation is high, Beijing will be less inclined to repeat that feat.

Hong Kong's Hang Seng Index added to losses after the PMI figures were released, down more than 4 percent at 0515 GMT. Asia's markets were already on the back foot after the Federal Reserve warned of "significant" risks to the U.S. economy, and the weak Chinese data only worsened the mood.

A similar set of data for the euro zone, due later on Thursday, is expected to show the PMI dipped to 48.5 from August's 49.0, according to a Reuters poll of economists.

With growth near stall speed in both the United States and Europe, it is no surprise that China's export-led economy is slowing. Its exports pulled back from a record high in August.

The PMI figures pointed to further slowing ahead. Both the new orders and new export orders sub-indices fell further below the 50-point mark in September.

But rising inflation pressures pose a policy dilemma for the People's Bank of China. Many economists think the PBOC will pause in its year-long tightening campaign to see how the global turmoil plays out.

The PMI data showed the input price sub-index rose to 58.8 in September, a four-month high. If manufacturers are paying more to produce goods, those higher costs could filter into consumer prices, driving up the inflation rate.

That would leave the PBOC in a bind. Premier Wen Jiabao and other leaders have repeatedly stressed that cooling inflation remains the top policy priority.

The global economy could use every bit of growth that China can generate. It is one of the few countries with both the capacity to ease policy and the size to make it matter.

Interest rates are already at or near record lows in the United States, Japan and Europe. All three regions carry heavy debt burdens that make it financially and politically difficult for them to provide more fiscal stimulus.

This will no doubt be a big topic of discussion among the Group of 20 rich and emerging economies, whose finance officials will meet in Washington later this week.