Villagers claim officials colluded with a score of developers to steal hundreds of hectares for development including a luxury holiday resort with salmon-pink luxury villas and a neon-lit nightclub sprouting out of former farmland. 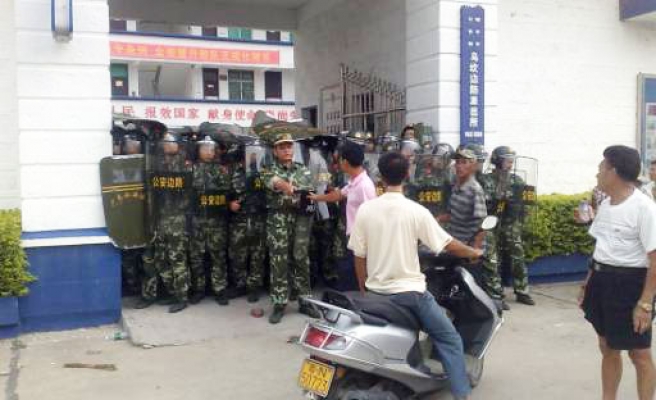 Hundreds of farmers from two villages in southern China's economic powerhouse Guangdong province persisted with a fourth straight day of protests on Saturday against brazen land grabs in the latest unrest to roil the region.

Lufeng, a city of 1.7 million, saw violent clashes with authorities earlier in the week, when villagers in the suburb of Wukan ransacked a government office and police station after riot police chased and beat up protesters.

No violence was reported in Saturday's protests, with security forces noticeably absent.

"We don't have weapons and armour, nor can we match them for strength, but we have the numbers to protect our village and the lives in it," said Lin Zuliang, a farmer representative from Wukan who addressed a cheering crowd via loud speaker.

As China rapidly modernises, wrenching changes have stoked tens of thousands of so called "mass incidents" countrywide each year. Authorities often crackdown swiftly on such dissent, including censoring reports, fearful of trouble proliferating.

Villagers claim officials colluded with a score of developers to steal hundreds of hectares for development including a luxury holiday resort with salmon-pink luxury villas and a neon-lit nightclub sprouting out of former farmland.

"When we smashed down the wall everyone was very happy," said Li Muxia, a Longguang villager, speaking near the destroyed walls and rubble stretching for almost a kilometre.

"But somehow, we're also worried that the authorities and local officials won't return this land to us."

Village representatives were due to meet with local officials for talks on Saturday, but villagers want Beijing to intervene.

"If the central government doesn't get involved in this, there will be no resolution," said Wu Suidu, a Wukan villager.

Unrest in one of China's most economically important provinces, with the famed Pearl River Delta "world factory" zone that accounts for around a third of China's exports, also poses a challenge for Guangdong Communist Party chief Wang Yang.

Wang, who is expected to be promoted to China's highest ranks in a major leadership transition next year, has called for a "Happy Guangdong" to even out economic imbalances and emphasises social harmony.

In June, thousands of migrant workers rioted in the Guangdong factory town of Zengcheng over the alleged maltreatment of a female worker, torching government offices, smashing cars and clashing with riot police.