Crimeans should pay back loans to Ukrainian banks - Russia

Ukraine's leading banks said most of their loans to Crimean individuals and businesses were now delinquent. 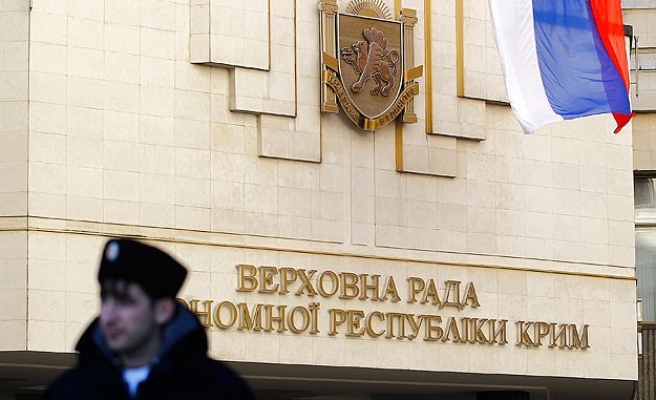 Crimeans should pay off their debts to Ukrainian banks despite now living under Russian law, a Russian central bank official was quoted as saying, marking a change in position by Moscow which had suggested ignoring any payment demands.

Reuters reported last week that thousands of Crimeans were not paying their debts to Ukrainian banks, with many taking their cue from Russian President Vladimir Putin who in April told one resident wondering how to pay off a car loan: "Please use the car and don't worry."

His spokesman later said Putin was referring to the fact that the banks' branches had closed in Crimea since Russia annexed the peninsula in March, making it difficult to pay.

Mikhail Sukhov, a deputy chairman at Russia's central bank, said on Monday Crimean residents' debts to Ukrainian banks would eventually have to be paid off.

"To pay or not to pay the loans is the responsibility of each person. But sooner or later they have to pay," Sukhov was quoted as saying by the Crimean news agency Novosti Krima during a visit to Crimea.

"As soon as working relations improve between Ukraine and Russia, a bank will be found to become an intermediary between borrower and lender and will undertake debt collection."

Sukhov reiterated that Crimeans could pay off their debts to Russian banks now, although there was no mechanism as yet to return those payments to Ukrainian banks.

Russia quickly moved to oust Ukrainian banks from Crimea after annexing the peninsula. It forced them to close, banned the Ukrainian currency and replaced the region's retail banking network almost overnight.

Ukraine's leading banks said most of their loans to Crimean individuals and businesses were now delinquent.

Ukrainian banks had loaned Crimean businesses and individuals about $1.8 billion at the time the region was annexed, according to Ukraine's central bank.

The surge in bad loans in Crimea has made it difficult for Ukrainian banks to repay Crimean depositors, an official with Ukraine's central bank told Reuters.