Dialogue of the deaf as Greek and German ministers meet

The two ministers did not discuss details of Greece's debt repayment schedule or the possibility of a debt "haircut", which Merkel and Schaeuble emphatically rule out 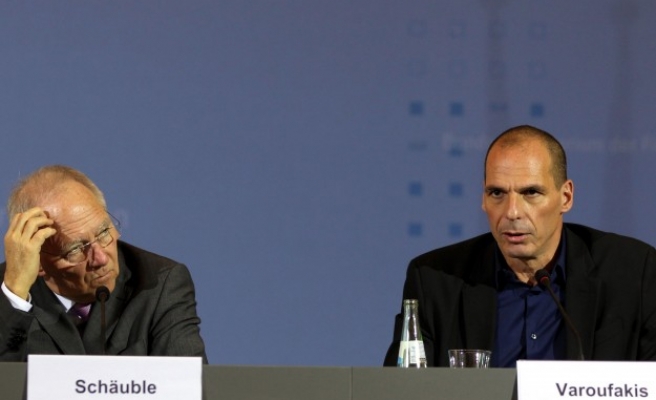 The maiden meeting between Greece's iconoclastic new finance minister from the Marxist left and his 72-year-old conservative German nemesis was never going to be easy. It turned out even worse than expected.

Yanis Varoufakis, notoriously casual in his dress, wore a dark shirt and jacket but no tie to meet the veteran Wolfgang Schaeuble. Not only did they look awkward together - they could not even agree on how much they had disagreed.

Schaeuble, whose passion for European integration is second only to his zeal for balanced budgets, said they had agreed to disagree. He was promptly contradicted by his younger visitor, who spoke in English.

"We didn't reach an agreement. It was never on the cards that we would. We didn't even agree to disagree, from where I am standing," said Varoufakis, a 53-year-old economist and blogger.

Schaeuble looked particularly uncomfortable when Varoufakis referred to Germany's Nazi past, which some Greek anti-austerity protesters have recalled by lampooning Merkel in a Nazi uniform.

Germany should understand Greece because its own depression in the early 20th century gave rise to the Nazis and now "Nazism is rearing its ugly head in Greece", said Varoufakis, apparently referring to the far-right Greek political party Golden Dawn.

Greece's new leaders have toured Europe this week seeking support for a new debt deal with the euro zone but come up empty handed. Berlin - capital of Europe's biggest economy and champion of the austerity policies that Tsipras wants to scrap - was the last stop.

Newspaper cartoonists have depicted the clash of ideologies as an unstoppable force - Tsipras and his Syriza party - meeting an immovable object, in the form of Chancellor Angela Merkel's austere conservatives.

The two ministers did not discuss details of Greece's debt repayment schedule or the possibility of a debt "haircut", which Merkel and Schaeuble emphatically rule out. Varoufakis presented proposals for a "bridging programme" until May.

He tried to convince Germany, whose taxpayers are weary of funding bailouts for what they see as spendthrift southerners, the new Greek government would be a reliable partner, saying Berlin could expect "a frenzy of reasonableness" from Athens.

But he also made an emotional plea for Greece's partners to respect the outcome of its election, saying treaties must be upheld "without crushing the fragile flower of democracy with a sledgehammer", referring to criticism from German politicians.

"Schaeuble Brushes Off Greek Minister," was the verdict of Germany's top-selling daily Bild, which has been critical of Greece throughout the euro zone debt crisis.