Gold extended its recent losses too, reacting to stronger equities and the robust U.S. economic data that curbed its safe-haven appeal. 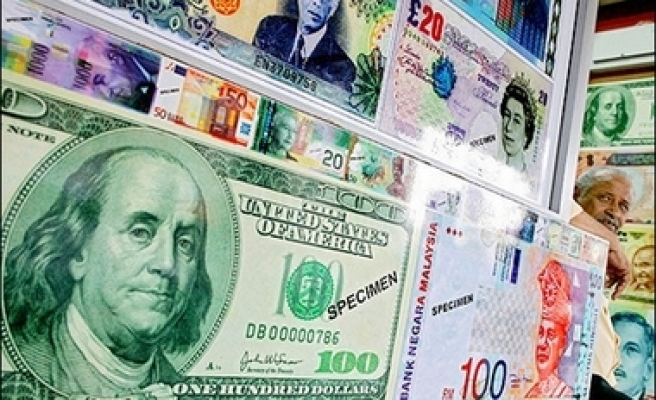 The dollar hit a four-year high and oil hovered near a two-year low on Thursday, as investors wagered the United States will be one of the few economies healthy enough to wean itself off of central bank aid in the near future.

Share markets in Europe started with small gains as Britain and France debated joining U.S.-led military action against militants and as the euro sank to a 22-month low on bets the ECB will need a major stimulus effort.

Its President Mario Draghi reiterated in a newspaper interview again on Thursday there was more the ECB can do if necessary.

His words came as the central bank released its latest batch of lending data that, like it has for months, showed there is little in the way of demand for credit in the euro zone's still-struggling economy.

"ECB President Mario Draghi continues to beat the QE (quantitative easing) drums ... so hardly surprising that euro/dollar is trading at even lower levels this morning," said Esther Reichelt, a currency strategist at Commerzbank.

Britain's FTSE, Germany's DAX and France's CAX rose 0.1-0.3 percent to put the region in the black
after a choppy few days, but it was the currency market where most of action was.
With the ECB data casting a shadow, the euro fell to $1.27305 its lowest since November 2012 while the dollar, which had its own momentum following some strong U.S. housing data on Wednesday, powered up 0.35 percent to a fresh 4-year high against a basket of currencies.

A key factor was widening yield differentials between U.S. 10-year government bonds and their German counterparts. The difference is the biggest in nearly 15 years and is driving more investors to buy the dollar.

The greenback was also within touching distance of its recent six-year high against the yen and was exerting broad downward pressure on commodities markets which are largely priced in dollars.

Brent crude was stuck below $97 a barrel having hit its lowest in 26 months, with abundant supply also continuing to drag on prices.

Gold extended its recent losses too, reacting to stronger equities and the robust U.S. economic data that curbed its safe-haven appeal.

Geopolitical uncertainty rumbled in the background as air strikes against ISIL militants in Syria continued, but there were more positive signs on the tensions with Russia over Ukraine.

Ukraine's President Petro Poroshenko said that for the first time in many months no deaths or wounded had been reported in the past 24 hours in the conflict with pro-Russian separatists indication the ceasefire "has finally begun working".

Russian stocks  rose for the third day running, with investors also sensing the European Union may decide to ease some of its sanctions against Russia by the end of the month.

In Asia it had been a mixed day.

MSCI's broadest index of Asia-Pacific shares outside Japan  fell 0.4 percent after touching a four-month
low, though Tokyo's high-flying Nikkei jumped 1.1 percent as the yen continued to bow to the dollar.
New Zealand dollar meanwhile hit a one-year low after Reserve Bank of New Zealand Governor Graeme Wheeler ramped up his recent warnings about the level of the currency.

"The Bank's analysis indicates that the real exchange rate is well above its sustainable level, and also above levels justified by short-term business cycle factors," he said in a statement that caught markets off-guard.

It also inflicted some collateral damage on its Antipodean cousin, the Australian dollar, which fell to $0.8813, its lowest since early February.