The new canal, that will allow two-way traffic of larger ships, is supposed to increase revenues by 2023 to $13 billion. 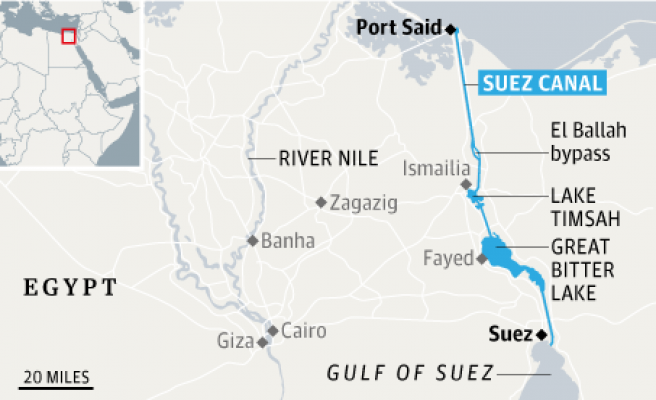 Egypt's military could help build an industrial hub around a new Suez Canal, the project's manager said, the first suggestion that the armed forces may play an important role in the huge investment venture planned alongside the new waterway.

"I hope there will be a role for the army in infrastructure and securing the project because this struggle needs the armed forces' experience," Memish said in an interview.

The military has experience building infrastructure and could also play an important security role at the industrial project, he said. Egypt faces an militant insurgency.

"The investor needs to feel security. I am sure that by building roads and power stations the armed forces can carry out these projects seriously and with speed and excellent experience.

"The army are the best people that carry out roads and power and water works," Memish said.

Private investors may be concerned however at more military involvement in the economy where critics say it already operates like a state within a state. Some estimates put the value of army's financial empire at as much as 40 percent of the economy. Sisi told Reuters last year it was no more than 2 percent.

For Sisi, the former army chief who toppled elected President Mohamed Mursi in 2013 and then cracked down on dissent, the Suez project, more than just an economic gamble, is a potent symbol of Egyptian nationalism.

The nationalisation of the Suez Canal by then president Gamal Abdel Nasser in 1956 sparked the Suez crisis in which Egypt prevailed against fading colonial powers Britain and France.

The canal, the fastest shipping route between Europe and Asia, earns Egypt around $5 billion per year, a vital source of hard currency in a country whose tourism and foreign investment have slumped since a 2011 revolt toppled autocrat Hosni Mubarak, a former air force commander.

The new canal, that will allow two-way traffic of larger ships, is supposed to increase revenues by 2023 to $13 billion.

Memish, whose headquarters has black and white photographs of Nasser, said an amended investment law designed to ease red tape for investors in the new Suez industrial hub would probably be passed next week.

Potential investors will be invited to participate, at an investment conference in Sharm el-Sheikh next month, in some of the projects associated with the new canal, including a fuelling station worth $90 million.

"If we provide not only fuel but also services such as drinking water, food, petroleum products and speedy maintenance they will come to us and not others," said Memish.

Asked how he would cope with Sisi's big expectations and tight deadlines, Memish said his long career in the military had prepared him. "Personally I am used to working under pressure."